Lut Bahadur is a military desert town in the Borderlands, located in the Kehjistan empire. 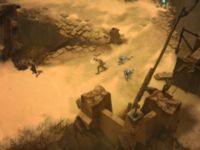 Lut Bahadur, translated literally as "city of the gate", was built as a base for the Caldeum Dune Guard to keep the lacuni in their cliff dwellings safely away from Caldeum several hundred years ago.

400 years ago, precious ores were found in the Stinging Winds, and Lut Bahadur got company in the wastelands by the town of Alcarnus and many smaller settlements. The discovery of the Dahlgur oasis and a third town in the Borderlands made the area full of life and trade.

The refugees report on cultist activities in the area and in Alcarnus.

Lut Bahadur is reasonably closely located to the Sundered Pass, from where help has been sent.

Lut Bahadur is part of the demo playable at GamesCom 2009 and BlizzCon 2009 in which the player is sent to as part of a quest.

Many names and locations in the world of Diablo are inspired by real world languages. Abd al-Hazir is one example where the name is from Arabic. Lut Bahadur is not one of these examples, however, as "Lut" translates to "homosexual" rather than "city" in real world Arabic. "Medina" and/or "balad" are the Arabic words for city, and we'll have to wait and see if those possibly appear in city names in the future.