The Foundry is an optional two storey dungeon that can appear in The Battlefields of Act III. It may not appear every game.

The second floor of the dungeon hosts a small event featuring a vision of Azmodan followed by an attack by a horde of enemies, triggered upon opening a Resplendant Chest surrounded by dozens of Guardsman corpses. 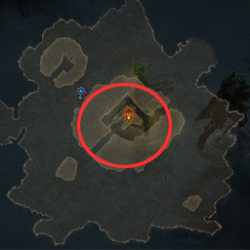 Annotated map of The Battlefields where The Foundry spawns.

Quests in The Foundry[edit | edit source]

Events in The Foundry[edit | edit source]

Farming for The Foundry[edit | edit source]

The following Superunique monsters can but might not always appear in The Foundry:

Waypoints are special plates on the ground that form a network of jump points allowing players to instantly teleport between them. The nearest waypoint for The Foundry appears

The Foundry is in some way involved in the following achievement(s).