The Defiled Crypt is located within Act I, below the Cemetery of the Forsaken. There are always three different entrances available out of a possible four. One of the three Crypts will have a second level that leads down to the Chancellor's Tomb, it's a very small level and always with the same layout. You will fight Manglemaw here before entering the Chancellor's Tomb. 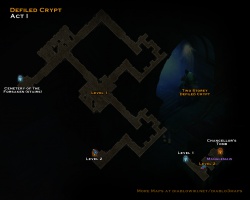 The following Bounties can appear in Defiled Crypt when playing in Adventure Mode:

The following Unique monsters can but won't necessarily always appear in the Defiled Crypt.