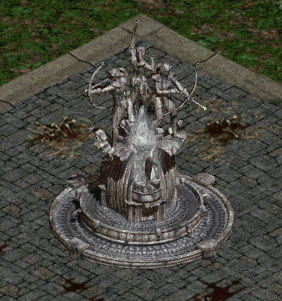 Fountain of the Monastery.

The Monastery is the stronghold of the Sisterhood of the Sightless Eye, known as Rogues to the locals, and functions as the pass into the Eastern deserts of Aranoch.

In the Games[edit | edit source]

In Diablo II, the monastery was taken over by Andariel and was rescued by the hero/heroine in the end of Act I. It is unknown whether we will see it in Diablo III.

Location of the Monastery[edit | edit source]

It's said that the Sisterhood "make their homes within the provinces of Entsteig", but looking at the World Map, the monastery looks like it might not be located within Entsteig, but rather in Khanduras.

Perhaps this is just one of their monasteries, and they have homes in Entsteig, but the monastery in Khanduras?

Considering how Akara describes the situation, Diablo II certainly suggests that the monastery is their one true ancient home, however. This might be a retcon, and the monastery is in fact located in Khanduras, and has been all along, or else the borders between the two countries are different than the world map suggests.