Are you looking for The Dahlgur Oasis lore book?

The Dahlgur Oasis forms part of Act II and is located in the Borderlands, in the Kehjistan empire, not too far from Alcarnus. 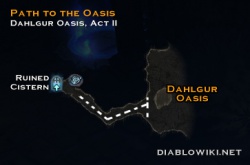 Path to the Oasis 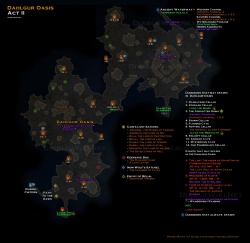 Path to the Oasis is such a tiny 'level' it does not have its own entry on Diablo Wiki. It is literally a short path with access to the Ruined Cistern and a Waypoint. It needs to be visited in order to complete the Unparalleled Splendor achievement.

The following Superunique monsters can but might not always appear in Dahlgur Oasis:

Waypoints are special plates on the ground that form a network of jump points allowing players to instantly teleport between them. The nearest waypoint for Dahlgur Oasis appears at a random location in the area. There is also one in the Path to the Oasis which is a very short path always at the very bottom of the area, though only in campaign mode.

Required for Historian of Caldeum achievement

Required for Judge of Character achievement

Dahlgur Oasis is in some way involved in the following achievement(s).

This is the farming region for Caldeum and is where most of the water comes for the area. It fuelled the rise of Caldeum. Legend has it that a mysterious desert prophet named Algert came in from the wastes, showed the early city fathers the oasis, then vanished never to be seen again.