The Diamond Gates appears in Act IV. They are the first line of defense in the High Heavens against invading forces from the Burning Hells. 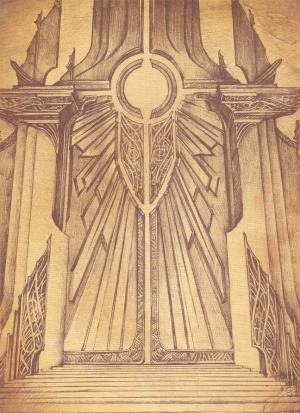 The Gates as seen in the Book of Cain.

The Diamond Gates compose one large super-structure with a crystalline appearance. It is a massive, imposing wall that has never been breached, despite various attempts from the Burning Hells to invade the High Heavens. The gates are also the most patrolled area within the heavens, and no mortal nor demon has ever set foot past it.

The following Superunique monsters can but might not always appear in The Diamond Gates:

Waypoints are special plates on the ground that form a network of jump points allowing players to instantly teleport between them. The nearest waypoint for The Diamond Gates appears

The Diamond Gates is in some way involved in the following achievement(s).