Ivgorod is a country on the western main continent of Sanctuary, in the Foothills on the edge of the Sharval Wilds where the famous monks reside. 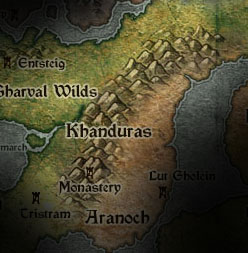 Not much is known about Ivgorod, except that it is located in "the Foothills on the edge of the Sharval Wilds".

The "Foothills" could then possibly be the foothills of the same mountain range as the Tamoe Highland and the Rogue Monastery in Diablo 2, just further north.

It's known that the order of Monks come from Ivgorod, and that they are the protectors of the land. They have accumulated knowledge of the body as well as of spiritualism, even if it's unknown whether or not they follow the Zakarum. Being so close to Khanduras, they have most definitely been approached by the priests and paladins of the religion.

"They (the Monks) are from an area called Ivgorod... that is in the Foothills on the edge of the Sharval Wilds, for those who care about such things."

Looking at the Writings of Abd al-Hazir, he writes about Ivgorod in his 32:nd entry, which chronologically seems to be somewhere on the western continent, if the entries are added through his travels in a logical order.

More information was revealed in an interview. [1]

I think the only character who actually goes through their homeland is, I believe, the wizard, Leonard [Boyarsky] knows more about this than me, sometimes I get this wrong. But I'm pretty sure it's the wizard. The monk's land we're not going to, but there are likely to be other monk characters and details about the religious group and the culture that he comes from.