The Keep Depths are the dungeons that lie below Bastion's Keep. The depths are labyrinthine storage facilities where the soldiers of the keep store their foodstuffs, munitions, and also appear to do research on siege technology. This area is featured in the quests The Breached Keep, and also Tremors in the Stone in Act III.

In addition, the first level of the keep may also spawn with an event called Forged in Battle.

An example of a randomized map from the first level of the depths can be seen here: 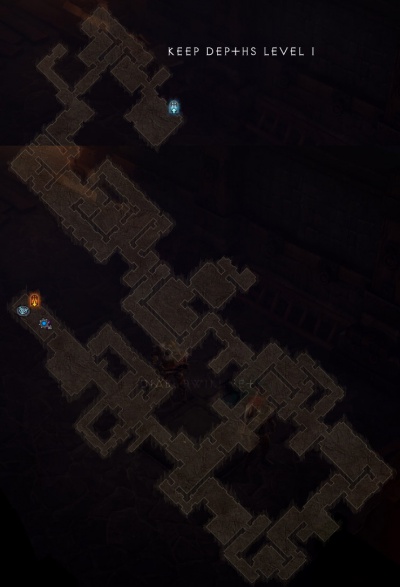 The Keep Depths Level 1, of many possible variations.

Areas and Dungeons within The Keep Depths[edit | edit source]

The following Superunique monsters can but might not always appear in The Keep Depths:

Waypoints are special plates on the ground that form a network of jump points allowing players to instantly teleport between them. The nearest waypoint for The Keep Depths appears

The Keep Depths is in some way involved in the following achievement(s).