The Tamoe Mountains lines the eastern border of the Western Kingdoms and acts as a natural barrier into these provinces from the East. 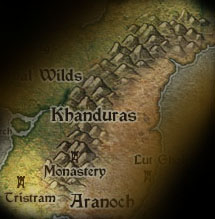 Although impassable in most areas, these mountains hold a vast and lush woodlands. These forests stand in stark contrast to the bleak wastelands lying beyond them to the east: the flat, unforgiving, sand-swept deserts of Aranoch.

These mountains house the Rogue Monastery of the Sisterhood of the Sightless Eye and in the foothills of Ivgorod, the home of the Monk.

The Tamoe Highlands are located on the western site of the mountains, following the trail up to the Rogue Monastery, which his guarding one of the few mountain passes in this region.

It's not entirely clear if the whole mountain range is called the Tamoe Mountains, or if Tamoe is the general area of the mountains. The individual peaks could then just be called mountains within the Tamoe - especially considering there's an area called the Tamoe Highlands which is not mountainous as such.

Also, even if the mountains are called specifically the "Tamoe Mountains" or perhaps the "Tamoes" is also unknown.