The Ancient Waterway forms part of the aqueduct system below the Dahlgur Oasis.

The Waterlogged Passage is just a tiny corridor that connects the Ancient Waterway with the Hidden Aqueducts. 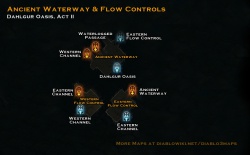 The Western Flow Control is accessed by going through the Western Channel. When you open the lever found in it, the Eastern Channel is opened.

The Eastern Flow Control is accessed through the Eastern Channel. The lever opens a short cut back to the Waterway.

Once this lever is pulled, the player is able to enter the Waterlogged Passage.

The following Superunique monsters can but might not always appear in Ancient Waterway:

Waypoints are special plates on the ground that form a network of jump points allowing players to instantly teleport between them. The nearest waypoint for Ancient Waterway appears in the Dahlgur Oasis.

Ancient Waterway is in some way involved in the following achievement(s).