Mount Nymyr is located to the south of the large series of high jagged peaks that go across the length of the south and east of Kehjistan. 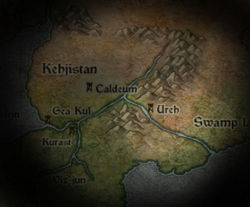 Nymyr not written on the map, but at the same location as Ureh.

The stone wall of Nymyr house the ancient and fabled city of Ureh. This mountain is mentioned in the novel Diablo: The Kingdom of Shadow written by Richard A. Knaak.

Most of the lore surrounding Ureh primarily relates to the city, and the mountain itself is just named. However, some magic forces might very well be emanating from the rocks themselves, seeing as Ureh is a portal of sorts between the High Heavens, the Burning Hells and Sanctuary.

At the very least it's a mythical and powerful place. We won't see it in Diablo III, but might do so in one of the expansions.

Nymyr is closest to the Swamp Lands, the jungles inhabited by the Necromancers.