Bastion's Keep is one of the few keeps the Children of Bul-Kathos kept to defend the Northern Steppes and Mount Arreat from invasion.

Abd al-Hazir visited the Barbarian lands, including Bastion's Keep and wrote about his experiences and observation in the 25th entry of his writings.

In my journey to catalogue the various denizens, civilizations, and fauna of our world, I have traveled far and wide, but never before have I been struck with such dismay as when standing upon the ramparts of the ancient fortress of Bastion's Keep. I came to see firsthand the barbarians, those near-legendary, immense, relentless, dual-wielding furies of combat dwelling upon their sacred Mount Arreat.

Instead, I stand here looking at a mountain that has been torn asunder by some extraordinary force. The sight, I must confess, is incomprehensible. Yet what I see before me cannot be denied.

What truly happened here? Where are those majestic warriors of old?

Bastion's Keep on the world map.
Bastion's Keep has been confirmed as a playable area in the game and, no less, one that is fairly pivotal to the plot. It is currently unknown where precisely in the timeline of the game the Keep will be featured, but the area will hold a siege of Hell's army pouring forth from the burning abyss. The Keep itself is situated in close proximity to the Arreat Crater, where the Worldstone was presumably destroyed by Tyrael. Twenty years after that critical event, the players find themselves facing the standards of Hell and defending the Keep from assault.

There are many locations within Sanctuary which are rich in history, culture, character, and lore. It is not often that we get to hear from the creators of such places about how they are built from concept to in-game representation. Fortunately, in the case of Bastion's Keep, that is exactly what we got at BlizzCon 2010. A fair portion of the Crafting Sanctuary panel at that year's BlizzCon was dedicated to Bastion's Keep, from intent to the finalized area that we will all, one day, finally be able to play.

The following sub-sections are taken from the crafting panel at BlizzCon 2010, narrated by various members of the development team. 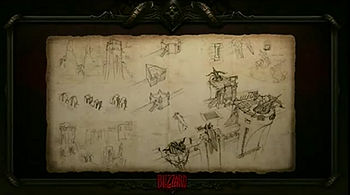 Early concept of the Keep's defenses.

When we were told that there was going to be a siege portion of the game, one of the first images that popped into our heads was the image of a battleship. Now, on a battleship there are a lot of shapes that really reinforce the idea that it's supposed to be this impenetrable fortress. So, we decided to work those ideas into our early sketches, and see how they turned out.

If you look at those, for example, maybe you see that giant iron spike-like thing hanging off of a chain that kind of reminds you of an anchor. The walkways of the fortress are already kind of long, and elongated, and they kind of resemble a ship anyway. So instead of having archers, maybe we should have giant ballistas on rotating platforms. Kind of reminds you of guns on a gunship, and maybe instead of round towers or the typical square towers, we could try to have the towers be triangles to remind you of the bow of a battleship.

That triangular shape is something that all of us really liked because of its iconic properties, and when we decided to use it as the main visual theme for the entire area.

So we decided to put variations of the triangle all over the columns, the doorways, the walkways, the towers, and it really gave it this unified look and feel, which made it seem as if it was designed by one architect, which is a good thing. 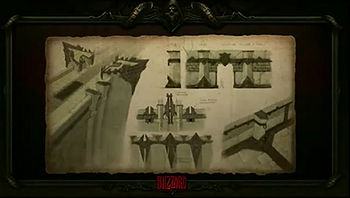 After that, it was time to define the materials, and for the materials we chose just simple stone and iron. They're simple materials, but they're also easy to read from our game cam, and they're easy to understand, as far as what it's made out of, and that it's very strong and sturdy.

So that was the first pass. After the first pass, what we have to do is show it to the team, we take their feedback, and incorporate whatever they want to see into the concepts, and try to do away with anything else that isn't really working. One piece of feedback that we heard often was that while the first pass looked good, it was designed well, it felt a little too ornate and frail. So we addressed mainly the iron portions; we made the iron darker, we made it chunkier, some of the shapes [became more simple], they became a little more aggressive. There are these big pieces of crude iron bolted onto this fortress for structural support. The stone and the iron-the stone got lighter, the iron got darker-so there was a better contrast between the materials. Even the stone itself got a little chunkier, and had little hints of those triangular shapes in it.

After that, we have to get our images ready for the modeler, and as a concept department, we really try to concentrate on putting as much information into one image as possible. If you look at this, the tone is decided, the mood is there, the color's there, the materials are there, but if you divide this image up, you have a lot of smaller components that that the modelers can take and build a lot of small, modular parts out of. This way, if they want to come up with a wide variety of layouts, it's easy to do, and if we want to go back and change things, it's also very easy to move things around. 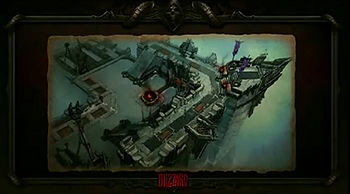 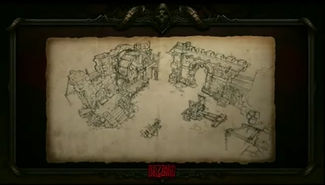 The interior of the keep in concept.

So we decided to do away with a lot of those triangular shapes, and maybe replace it with more square-ish shapes. They're both angular shapes, but a square is a lot less aggressive than a triangle. We also got rid of a lot of the iron and replaced it with wood, because the color of wood is already warm enough, and as a material, it just isn't as threatening as any kind of iron.

And to reinforce the idea that the inside is where the soldiers are, we wanted to populate it with a lot of props or devices that they'd be using like catapults, ballistas, or mills or forges; things that they'll be using to prepare for the battle on the outside. When you put all of that together, you get this where you have the same kind of stone as the outside, you don't have as much iron, there's a lot more wood, there's devices that they use for battle, and you definitely have a mood that has changed from a hostile battlefield to this uneasy, nervous, calm-before-the-storm kind of vibe to get you ready for what's happening on the outside.

The Process of Creating the Keep[edit | edit source]

The rest of the Bastion's Keep portion of the Crafting Sanctuary panel was mostly irrelevant to the Keep itself. If you are interested in viewing it, however, you can find the video on the diablo.incgamer's YouTube channel, or click here for the video itself.

Below is a collage taken from BlizzCon 2010 that shows Bastion's Keep throughout various stages of development.