Forlorn Farm (and Farmer's Cellar) is a farmstead in The Fields of Misery of Act I. You will get ambushed by a bunch of Burrowing Leapers when you click on the still-warm corpse of a beast. Also a Superunique Leaper called Burrow Bile.

Once they are dead the Terrified Farmer will appear and thank you for saving his farm. He'll invite you down into the Farmer's Cellar to meet his wife who sits in a rocking chair by a roaring fire. Unfortunately, she is dead and now just bones, only the poor farmer doesn't acknowledge this and still talks to her as if she were alive.

Before leaving the farmer and his dead wife you can pillage the contents of their humble abode (shame on you), there's some barrels and usually a Resplendent Chest for the taking. 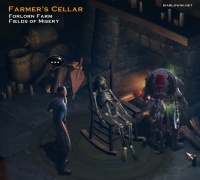 Farmer and his 'wife'

The following Bounties can appear in Forlorn Farm when playing in Adventure Mode:

The following Unique monsters can but won't always appear in the Forlorn Farm.

The Forlorn Farm is in some way involved in the following achievement(s).