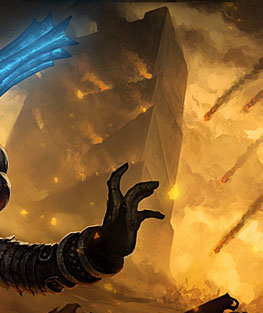 The massive Burning Tower, under siege?

The Burning Tower is the temporary name given by the fans to the massive tower first seen in a piece of Barbarian concept art here seen to the right. This article will be renamed when more information is made available about this tower.

The significance of this tower was noticed by Flux as he was writing entries in the Upon Closer Expection column over at Diii.net. The main article can be found here.

It's a tower, or at least some sort of cube-shaped castle, with what looks like steep stairways carved into the sides, up (or down?) which hundreds of people with torches are rushing.

That's kind of odd, but what makes this bit of background art worthy of closer notice is the fact that it turns up in several different images. It's seen in two pieces of Barbarian art, with a much larger view in one of them, and it’s in a piece of Monk artwork, drawn from an entirely different angle/perspective.

A background image that shows up that often seems a good bed to be more than just decoration. Will this Burning Tower show up in the game? Is it related to the plot? Could be...

This tower turns up in two Barbarian pieces and one Monk image. The two Barbarian shots each use the same background drawing, but it's been repositioned behind the Barbarian image, in a way that's fairly interesting in of itself.

This one shows just the ground beneath the Barbarian and the upper portion of the tower. It’s cropped so that you can’t see any of the bridges or lower city below the tower, and it just looks like some structure far in the distance behind the Barbarian. Perhaps in a desert type area of dry beige stone.

Yet the exact same two images—the same Barbarian concept art and same tower image in the background—look totally different in this picture. The tower image has been moved to the side, so it’s more behind and beneath the Barbarian, and with all the green-lit undercity in view, the Barbarian now seems to be standing on a perilous ledge, while behind and below him lies a vast city.

Also note how different the people rushing into the entrance to the tower on the right area; in this long shot they appear to be storming a castle over a bridge, while in the first Barbarian shot they were just standing around outside it. The difference it makes to our view, being able to see that they’re crossing a bridge, is considerable.

The other tower shot can be seen here, in the background of a Monk image. This is not the same drawing of the tower; it’s seen from a lower level, and as with the other shots, the other elements of the shot change how we view it.

In this shot there appears to be a volcano erupting to the right; either that or an unseen army is assaulting the tower, and hurling flaming stones or shots from catapults. Those flying, smoking projectiles make the flames on the tower ramps, which look like torches held by unknown people in the other shots, look instead like burning impact points; as though the tower had taken damage from an attack and is under siege.

It looks like people are massed on the ground to the right of the structure, as though a battle is raging just outside the building. They’re actually too small and indistinct for us to be sure, but that impression is given largely thanks to the burning tower and the flaming projectiles; such are signs of war, thus any jumbled patch of something next to the tower seems a good indication of a battle.

So What Does It All Mean?[edit | edit source]

Aside from demonstrating just how much one’s impression of an image can be changed by the framing and angles and extras added to the sides, it’s not clear what these shots represent. There’s nothing in any of the Diablo novels that corresponds to this. No climactic scenes of adventurers storming a square tower and burning it in battle, so we don’t think this image represents a past event. Thus it might well represent something we’ll see in the game?

The Diablo 3 team has released a lot of (88, so far) pieces of Environmental Concept Art, but none of them show anything like this tower. It’s not like anything in the various views of Caldeum, it’s not part of Ureh, it’s certainly not part of Tristram, and it doesn’t look like any of the structures or cities shown in other concept art that we don’t know much about. Examples:

Ureh: Which will not be a location visited in Diablo 3; at least not the original release. Expansion destination?

In fact, there’s only one piece of environmental artwork that seems to have anything in common with the burning square tower. And it’s a piece that’s a complete mystery, and was only seen on the initial June 2008 artwork movie. You can see it below; click it for a larger view. The buildings in the foreground aren’t very reminiscent of anything (though the green-tinged ones in the larger tower view might match; hard to say), but the broken, imposing structure in the background has something in common with the square tower. It’s not an exact match, to be certain, but the stonework is of a similar color, and if the square tower were broken… it might look something like this? 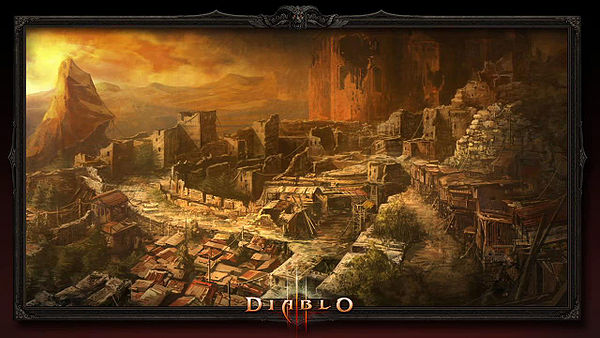 1) The tower is just a decorative flourish that one or more of the Blizzard artists like. That it’s in multiple images doesn’t mean it’ll show up in the game as a real location.

2) The tower is concept art for some object or location, but it’s mostly just a cool object to spice up the background of various pieces of character art. It’s nothing like any known city artwork.

3) The tower is probably a game location, or else we wouldn’t get previews of it in multiple pieces of concept art, but who can say what or where. Much more evidence is needed for more than idle speculation.

4) The tower looks like concept art for a structure we’ll see in the game, and that it’s in multiple different pieces of concept art shows that it’s important to the plot. I fully expect my character to battle their way up those sloping stairways on the edge of the structure come D3’s release.

5) The tower is Bastion's Keep, a keep of the Children of Bul-Kathos kept to defend the Northern Steppes and Mount Arreat from invasion. The Monk's artwork depicts a fight at Arreat's Crater, making the burning tower actually Bastion's Keep being attacked. It would also make sense, considering that the Burning Tower was seen on two Barbarian images, and Barbarians are associated with Bastion's Keep on the writings of Abd al-Hazir

Pick one that approximates your view, or make up your own. That’s what the comments are for, after all.

Even if the tower isn’t anything significant, it’s fun to speculate about, and any excuse to look through more of the game art is a good thing.