The Ancient Cave is a two level dungeon that can appear in the Dahlgur Oasis in Act II. It is not involved in any quests or events.

It can get quite busy down here the deeper you move into the first level as the groups of Chilling Constructs that appear grow larger and if Swarms and Eels are there too it's easy to get boxed in to one of the small inlets and overpowered.

Level two is tiny but there is a Resplendent Chest there so a chance of some nice booty.

It is also necessary to visit both levels of the Ancient Cave in order to complete the Nooks and Crannies achievement. 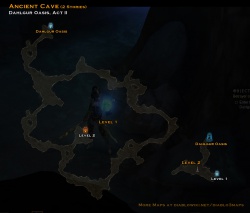 The following Bounties can appear in Ancient Cave when playing in Adventure Mode:

Waypoints are special plates on the ground that form a network of jump points allowing players to instantly teleport between them. The nearest waypoint for Ancient Cave appears in the Dahlgur Oasis or use the one in the very short Path to the Oasis which is always situated at the very bottom of the Oasis.

Ancient Cave is in some way involved in the following achievement(s).