A shared skill is a term for a skill that provides a bonus to the caster, as well as to others in the party. These may directly boost all players, such as a buff, or they might provide their benefit by a debuff on monsters that all players benefit from.

There were numerous shared skills in Diablo II, including most of the Auras and Warcries, plus many of the Necromancer Curses, which debuffed the monsters in ways that all characters in the game could benefit from.

There are few shared skills in Diablo III, (though Runestone add more) which some players have taken as a bad sign, since it seems to remove one of the major reasons for co-op play.

This list includes actual shared buffs, as well as monster debuffs that are of benefit to any character in the area. Runestone effects will be added to this list once they are finalized in the game. 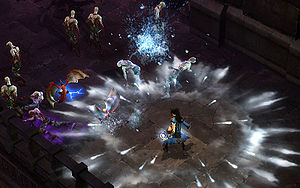 While the WD is similar to the Necromancer in many ways, his few mind control skills have nothing like the effect that Necromancer Curses did on enemies.