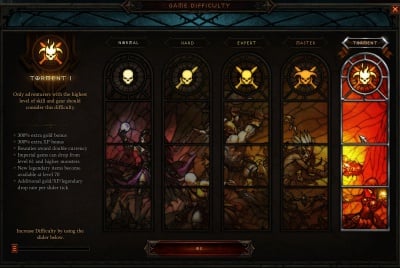 Difficulty in Diablo 3 and Reaper of Souls has changed greatly over the course of the game.

The current system, implemented in D3v2 and Reaper of Souls in early 2014, allows players to select difficult from Normal up to Torment 6, with monsters increasing in hit points, damage, and exp value with each level. The level of the monsters is entirely scaling though, always changing to match that of the highest level character in the game. In this system, a level 45 character will find level 45 monsters in Act One or Act Five, and all the monsters will increase in level as a character levels up.

This is a big change from the system the game launched with, which emulated the previous Diablo titles. In D1 and D2 and D3v, all the monsters were pre-set to specific levels, staggered over 4 difficulty tiers known as Normal, Nightmare, Hell, and Inferno. Each difficulty tier repeated the same content, with only the levels of the monsters and the various gold and exp rewards increasing proportionately. Players could further customize the difficulty by setting the Monster Power level from 1-10, which was similar to the current Normal-Torment customizable system.

This entire system was changed in Diablo 3 version 2 and Reaper of Souls. The four difficulty levels were removed and replaced with a scaling system where every monster in the game is scaled to the level of the character who created the game. Players can further customize that by selecting a Difficulty level. Raising the difficulty increases monster hit points and damage, while also boosting the exp and gold rewards for monsters, as well as all quests, bounties, Cursed Chests, etc. Higher difficulty levels also increase the drop rates of legendary items, and in the end game there are numerous features unlocked by playing on Torment (or higher) difficulty.

While the progression has changed from tiers to scaling, many game features remain at the same approximate levels. The designed character/monster levels were formerly 1-30 in Normal, 31-50 in Nightmare, 51-60 in Hell, and 60+ in Inferno. Thus something like new Elite Modifiers and a second Elite ability that were formerly added in Nightmare show up in the scaling system when the monsters are around level 30.

The difficulty levels are set by the player upon game creation, and each level changes many aspects of the game. The full details can be seen further down this page in the large table. Each level higher in difficulty setting increases the monster hit points and damage, as well as the exp/gold rewards for killing monsters, as well as completing quests, bounties, and side events.

These are the values for the Diablo 3 console. The upcoming PS4 version of Reaper of Souls will have different settings, presumably much closer to what's seen on the PC in Reaper of Souls.

Running the Infernal Machine to obtain a Hellfire Ring is more complicated in the new system. There are now four keys, rather than just three, and four portals with four Demonic Organs required to create a Hellfire Ring. One benefit is that players can now specify which portal they create, so if just one Organ is needed, a player can go after just that one, instead of simply opening a random portal and hoping to get the one they want.

The new system has stingier drop rates for Keys from Key Wardens and Demonic Organs from Ubers. These do not drop at all until at least Torment 1, and max out with a much lower drop rate than the 100% possible in MP10 in Diablo 3 vanilla.

The odds are as follows. Nothing will raise these any higher; not equipment bonuses or other players in the game. As always, it is better to farm them in a party, since the hunting and killing goes more quickly, plus everyone has the same chance for a key to drop, and everyone in the game can use each opened portal. Thus four players each with one Infernal Machine can do all four Ubers in the same game.

Legendary items have a base drop rate which varies greatly between different types of enemies, objects, and clickables. Most players have different opinions on where legendary items can best be found. Bosses are more likely to drop legendaries than trash mobs, but there are many more trash mobs, some areas of the game have lots of chests, etc.

Blizzard has never revealed the base drop rates, but they have disclosed the bonuses to those drop rates players can obtain by playing on higher difficulty levels, and especially by hunting within Nephalem Rifts. All bonuses apply to Legendary and Set items, and remember that class Set Items can only be found on Torment 1 and higher. There are also numerous new legendary and set items in Reaper of Souls that can only be dropped on Torment 1 and higher.

D3v2 and RoS add many new crafting plans. The lower level ones can drop throughout the game, but most of the new ones will only begin to drop at level 70, and require the Jeweler and/or Blacksmith to be trained up to level 12 in order to learn the plans and produce the new items or gems.

In Diablo 3 vanilla there were new tiers of crafting materials for each difficulty level, with white, blue, and yellow mats for each, plus Fiery Brimstones as an orange material that was only available in Inferno, plus Demonic Essences that only dropped from Elites on Inferno. There were also Tomes of Secret and other assorted "drop-only" materials. The entire crafting system was overhauled in D3v2 with materials simplified.

In the new system many of the previous materials are eliminated. There are now just 10 basic types of crafting materials, two tiers of white, blue, yellow, special yellow, and orange, found/salvaged from 1-60 and level 61-70, plus a huge assortment of legendary materials, most found only at lvl 70 in Reaper of Souls.

Drop rates for these items increase with difficulty level:

Gems from chipped up through Flawless Squares drop in Diablo 3, starting at about character/monster level 15 and progressing gradually upwards to level 8 gems (flawless squares) with a new type of gem beginning to drop about every 5th monster level. The lack of an Auction House makes it very difficult to create high level gems, since hundreds and even thousands of Flawless Squares are required to combine up into level 10-15 gems. (Though D3v2 greatly reduced the gold and material cost for gem upgrading.)

This system changes radically in Reaper of Souls, where after the same level 1-8 gem progression overthe course of character/monser level 1-60, things jump up a great deal at level 61. Then Marquise (level 15) begin to drop, with a chance for the next level, Imperial, on Master or Torment difficulty. These higher level gems utterly outclass the lower level gems, and with no level requirement to use them, they make twinking very easy.

Players just moving into Reaper of Souls from Diablo 3 wind up simply throwing away (vendor selling them for a fraction their previous value) all their sub-Marquise gems, and there's the curious dead zone from gem level 9-14, since these never drop and are very hard to create in Reaper of Souls, since Flawless Squares (gem level 8) only drop from around level 58-60.

The effectiveness of the Life Steal affix – which restores your Life by a percentage of the damage you deal – was formerly reduced on higher difficulty levels. It now is reduced at certain character levels, becoming non-functional at level 70.

Elite modifiers are are introduced gradually, with more difficult modifiers coming in at higher levels, and random Elites gaining a 2nd, 3rd, and ultimately 4th effect at higher levels. Those proceeded at regular level intervals in Diablo 3 vanilla, with the 2nd boss modifier coming in Nightmare, 3rd in Hell, and 4th in Inferno. In D3v2 and RoS there are no such tiers, though the various Elite Modifiers and the 2nd, 3rd, and 4th abilities come at levels that approximate the designed progression curve from Diablo 3 vanilla.

Numerous monster properties vary with difficulty level, with enemies growing more resistant to stuns and other crowd control effects on higher levels. These effect were previously tied to difficulty tiers. Now they scale up with monster levels, same as hit points and damage. When viewing the following chart, simply substitute the levels for the tiers. e.g. Normal = 1-30. Nightmare = 31-50, Hell = 51-60, and Inferno = 61-70. 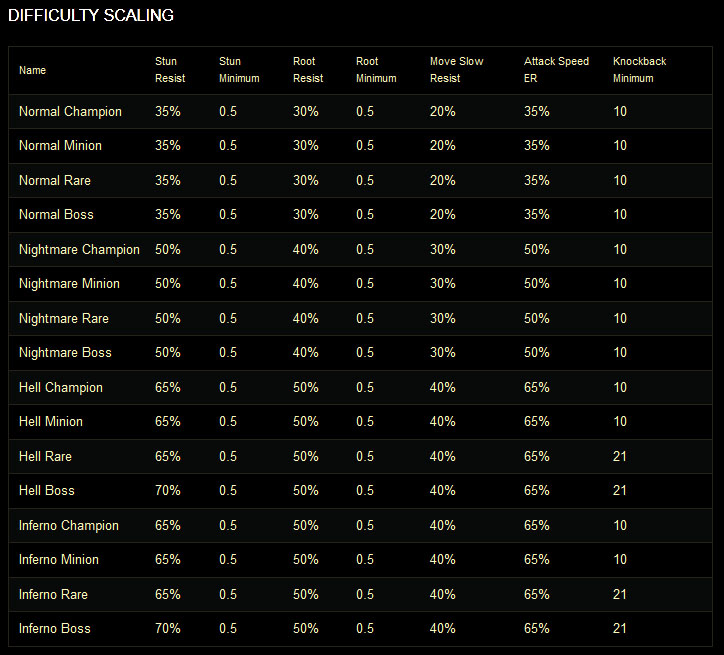 Minimum values must be exceeded for properties to take effect.

Tweaks to these formula are frequently enabled. In September 2012, Wyatt Cheng posted an extensive developer blog post with details about changes in the v1.0.5 patch. [2] This information is still relevant, with the tiers spread more gradually around the approximate monster levels, instead of kicking in exactly on the new difficulty tier.

What This Means For the Player:

Monsters gain power and rewards with more players in the same game, regardless of the level of the players, if they are in the same area, etc. Another player standing in town still causes all enemies in the dungeons to scale up, same as if that player was in the dungeon fighting. The scaling is dynamic; monsters will increase or decrease their multiplayer scaling only when they spawn, so as other players join or leave the game the properties change dynamically; not for monsters mid-fight, but for monsters that have not spawned yet.

All difficulty-scaling features in Diablo 3 version 2 and Reaper of Souls are presented in the following table.