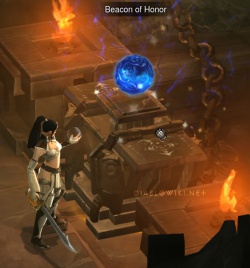 A beacon from one of the temples.

Just before reaching the The Old Mill you will be approached by the Scoundrel who will ask you to help him rescue his friend, Sasha, whom thieves are trying to kill so they can steal her relic. Once you have killed the thieves Nigel Cutthroat will appear. Kill him to complete this part.

At this point Sasha will give the relic to the Scoundrel who asks to join you. Lead him to the waypoint to the north at which point you may take him as your follower if you wish.

Nearby the Waypoint is Alaric, the guardian of the temple. He will raise a bridge for you to cross to the Festering Woods. Alaric wants you to retrieve the Beacon of Honor from the Warrior's Nest and the Beacon of Light from the Crypt of the Ancients.

There is a chance you may come across one of two events in this area. If you come across the Nephalem Monument click it to trigger the Eternal War, which comes with an achievement. The second one is Last Stand of the Ancients, also with an achievement reward (for both single and coop play). Both consist of fighting off a horde of monsters. 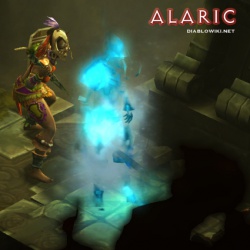 Alaric, Nephalem knight
The entrances to both of these are round about the same place every time in the Festering Woods (map). Those dungeons are small and it's easy to retrieve both Beacons.

Once retrieved head back to Alaric and place the Beacons on the pedestals nearby him. With the Beacons placed the entrance down to the Drowned Temple behind Alaric will open.

Not far into the temple you'll have to fight one champion Ezek the Prophet and then three unique monsters Karel, Larel and Moek. All are melee attackers, however, they do summon skeletal archers regularly during the encounter. If you kill the three brothers with a single blow each you will earn an achievement, Nyuck, Nyuck, Nyuck for your efforts.

He'll open the way to meet Maghda. She sets about half a dozen Dark Zealots on you and once they are dead she will disappear leaving the glowing sword shard behind, which you take to The Stranger in Tristram.

The Broken Blade quest forms part of the following Achievement