Diablo Fan Art Watch is an irregularly posted news post for the Fan Artists in the D3 Community on Diii.net. 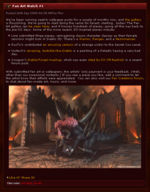 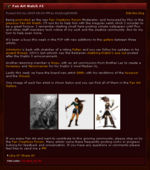 First Post by Holyknight3000
On 26 September, 2008 the Fan Art Watch was started by Flux to showed off the Fan Artists in the Fan Art community; their works to the public. Some weeks were slow so the post would post every other week.

On 03 June, 2009 the Watch was taken over by Holyknight3000 after his promotion to the Fan Creations Forum's Moderator [1] and having had his writing skills approved by the Diii.net crew.

On 02 July, 2011 the Watch reached a milestone 100th post that featured fan art and 3-D in-game fan made armor that was made for the game Elder Scrolls IV: Oblivion.

On 24 July 2013, the Watch reached another milestone with its 200th post featuring an interview with the first artist ever featured in the watch; Patrik "Unidcolor" Hjelm also known on the forums as Vortexh.