The Legacy of Cain

This quest picks up directly after The Fallen Star and is initiated by Leah, who has tasked the hero with finding her uncle, Deckard Cain, who is startingly still alive despite the fact that he was already senile before dirt had the chance to celebrate its first birthday.

Take the Waypoint in New Tristram back to The Old Ruins. Leah will open the gate for you and follow you through it down the Old Tristram Road. You'll encounter Zombies and Walking Corpses. You'll come to Adria's Hut and get a Checkpoint here. Inside her hut is a Hidden Cellar, follow Leah down the hatch.

As you approach a cauldron sitting over a burning fire a unique undead called Captain Daltyn will appear. He's accompanied by three Zombies which do not present a problem.

The Captain's melee attack is nothing to fear but he has a Frozen attack too. He lays down multiple grenades that explode over a certain radius inflicting damage and freezing players within it. Kill the zombies first and move out of range of the Captain's grenades' explosion radius so you are not frozen and he too should be easy enough to kill.

Once the captain is dead, Leah will give you the key and Adria's Journal.

As you leave the cellar you'll be set upon by more Zombies. Easy prey. Make your way back up Old Tristram Road and into the Cathedral. You'll get a checkpoint just as you enter the level and also just before you go down to Leoric's Passage.

The Cathedral is where the game steps up a gear and begins to get a little more challenging. Here you'll face,Carrion Bat, Grotesque, Ravenous Dead Risen and Walking Corpses and they'll attack in groups of multiple types and in numbers not yet encountered. 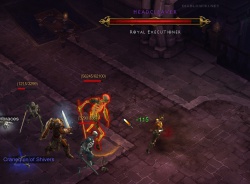 It's worth exploring all this level even if you come across the entrance to Leoric's Passage early because it's this level that the Black Mushrooms can be located in. They are a reagent for the Staff of Herding which grants you access to Whimsyshire.

When you make your way down to Leoric's Passage you'll find Deckard Cain fighting some skeletons. A short in-game sequence will play which you can ESC out of it. Here you will battle Headcleaver and his Royal Henchmen. There are no special attacks here but he does have a nasty kick in addition to his melee attack.

There is the opportunity to earn an Achievement, Cut Off the Head where you must kill him before any of the henchemen that spawn with him. You can kill the initial bunch of Skeletons you see when you get down there but not the ones that Headcleaver spawns with.

Speak with Deckard Cain now and follow him back to New Tristram where the quest ends with Leah and another checkpoint reached.

The Legacy of Cain quest forms part of the following Achievement

A video walkthrough of The Legacy of Cain is available: