The Wheel of Misfortune is an achievement that can spawn in the Desolate Sands in Act II.

If an Ancient Device spawns in front of a platform breaking the device will cause one of ten things to happen. As the device will not always spawn it could take some time to work you way through the ten at which point you will earn the achievement. 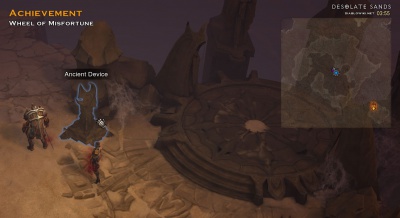 Regardless of whichever scenario appears Garot's Corpse will always be the device with a satchel that will contain a copy of Lyndo's Journal, a requirement for the Judge of Character achievement.

Farming for the Wheel of Misfortune[edit | edit source] 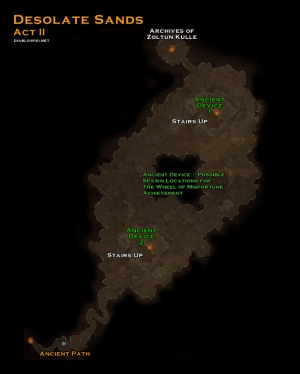 It's easiest to farm this in Adventure Mode.

It's much more difficult to collect the ten unique activations in Campaign Mode:

2. Repeat from the Checkpoint

A video showing each outcome of the ancient device: