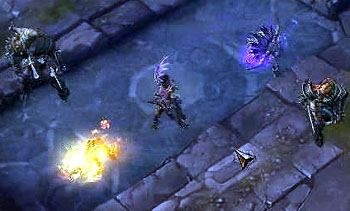 While Diablo III is fully playable solo, without any "raid" type content that requires multiple players to defeat, the D3 Team had co-operative multiplayer as their highest priority all during development. As frequently stated in interviews, "Do no harm to co-op." was one of their main considerations during all development decisions, and whenever they speak of the most fun way to play Diablo III, they stress that a friendly party of up to four players (which is the maximum game size in Diablo III) is the best way to experience the game.

Diablo III features several improvements over Diablo II's multiplayer experience: there are now individual loot drops, there is no nonconsensual PvP (PKing), and other game features such as the party system and the quests system have also been upgraded. On the other hand, some of D2's major bonuses to group play, such as greatly increased drop rates and experience gain are not present in Diablo III, and there are many fewer skills with shared benefits for the whole party.

As a result, fans have often pointed out[1] that while D3 removed numerous problems with D2's MP play, it's actually removed a lot of the bonuses as well, and that the D3 developers seem to simply assume fans will play together, even in the absence of actual benefits for doing so. That the vast majority of games during the Diablo 3 beta are single player seems to support this concern.

The other major aspect of MP play in Diablo III is PvP dueling, which now takes place exclusively in the Battle Arena.

There is no more party system in D3, at least not like there was in D2. In D2 players who joined a game were neutral, neither friend nor enemy. They could become enemies by clicking the hostile button, or become friends by joining a party together. Once they were partied, they shared experience and gold, if they remained fairly close together. Partying was optional though, and parties could be dissolved or abandoned, or everyone in a party could simply go their own way within the same game.

In D3 there is no more party system. All players in the same game are automatically in a party, and there is no way to leave a party or go hostile in the basic PvM game mode. Players in reasonably close proximity share experience, and all gain benefit when anyone in the party hits a health globe, but gold and items are not shared. Instead, all players in Diablo III get their own gold and item drops that no other player can see or take. This makes ninja looting a thing of the past, but also forces a player to run to fetch all his own gold and items.

As of the beta there are not any improvements or customizations to the Friends List, in terms of guild support, though Blizzard remains committed to providing some such options at some point. Bashiok elaborated on this point in a forum post from September 2011.[2]

[blue]Having ways for friends and acquaintances to create social groups has been in the long term plans of the new Battle.net for some time. Whether they’re called clans or not is a smaller detail. It’s just getting the time to work on adding in those types of want-to-have features. Almost assuredly not for the launch of the game, but hopefully at some point in the future. [/blue]

Cooperative play, often referred to as Co-op, is the practice of playing a game together with other humans working towards a common goal. While Diablo III is not a party-required game, with raid type content that can only be accessed by a group of players working together, the developers clearly intend players to play together, and numerous of Diablo III's systems are designed around co-op play. New features or improvements in Diablo III that are meant to foster more co-op play include:

While these features are definitely boosts to co-op, some fans have pointed out that they're more about the removal of anti-co-op features, rather than the adding of specific benefits to it. On that side of the coin, Diablo 3 has some areas with fewer co-op bonuses than were present in Diablo 2.

For their part, Blizzard has said little more than, "It's more fun." as an endorsement of why players should team up, rather than playing solo, or going their own way in a larger game. Other than fun, faster killing speed (when in a co-op party) is often brought up as a benefit,[3] as additional players will (theoretically) boost the group's damage output by about 100%, while monsters only gain 75% more hit points in larger games.

Part of me thinks it’s cool that I can play solo and never feel like I’m missing out on something. But another part of me thinks that since this is an online-only game that we should WANT to play Co-Op and that there should be added incentive for doing so.
Faster killing speed means more drops, more drops means more power or money. Since the goal of the game essentially boils down to either power or wealth, or both, the advantage (in our opinion) is pretty clear and doesn’t need any additional incentive.

This is similar to the gain in hit points that additional players generated in Diablo II, but there is no corresponding gain in experience in Diablo III, nor are there more total monsters, more bosses, or more items or gold dropped by the monsters or chests. (All of which happened in Diablo 2.)

The benefit to more players in a game in Diablo 3 is that the group killing speed should increase, theoretically by about 100% per additional character. Survivability should be enhanced as well, with players able to take turns tanking up front, as well as supporting each other with some shared skills and improved tactics. Players will need to do so, to offset the increased monster hit points, and the developers have often said that the Inferno difficulty level will be balanced to basically require player cooperation in order to survive.

The trading system has been entirely overhauled in Diablo III. Trading is now automated and made much more convenient through the Auction House. Ironically, this has removed almost all of the multiplayer aspect of trading, since players no longer need to speak to other players to exchange items.

Whether these changes are good or bad for multiplayer can be debated, but most players felt the Diablo II system was hopelessly inefficient, and that Diablo III's will result in much easier distribution and acquisition of desired item upgrades, which will be beneficial to the overall play experience.

There are also public chat channels, including Trading channels, which players can use to hawk their wares, if they so desire. 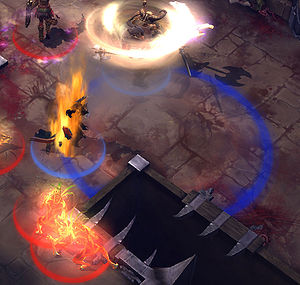 Diablo III's Player vs. Player combat system has been entirely overhauled as well. Gone is any sort of in-game PvP, whether dueling or PKing. Players now have no way to directly attack each other in-game, and this even extends to sprite collision. Other players can not block doorways or chokepoints themselves or with their pets, and none of their spells or skills can hit you for any damaging or debuffing effects.

PvP instead takes place in a randomly-selected team-format in special dueling games known as the Arena. Only in the Arena can players attack and injure each other, and that's the entire purpose of those games. There are no NPCs to access, no town to return to, or anything else along those lines. Players in the Arena duel non-stop, and the team with the most total kills in the allotted time (10-15 minutes in testing), wins.

Jay Wilson spoke about the various in-game notifications and conveniences in an interview from Blizzcon, 2010. [4]

We’ve tried to put a lot of hints in, for cooperative play, so other players notice if you stop moving. Especially if you open up a skill page or your inventory, we put an icon that displays over your character’s head and on your portrait so the other players will see it and know that you’re busy. That you’re doing something. ...As developers, we’re looking at ways to make it easier for characters to communicate and we’re looking to put more option in for that. After all, the game knows if a player is looking at their skill page, so why don’t we just provide some sort of in-game notification to other players? So the players in the game don’t have to wonder why someone in the game isn’t keeping up. When you know the other player is doing something specific, you’re a little more patient.

Blizzard intended to phase chat channels out of B.net with their newer games, starting with Starcraft 2. That plan did not last in the face of intense player criticism, and chat channels were added back into Starcraft 2 some months after release.

They were not present during the Diablo III beta, but have been confirmed as a feature[5] for the full game. This was no surprise, after the developers said they hoped to include them, eventually.[6]

Chat channels debuted with beta patch 13 in February 2012, and proved instantly unpopular due to their small size and general lack of convenient chat features. See the chat channels article for full details. 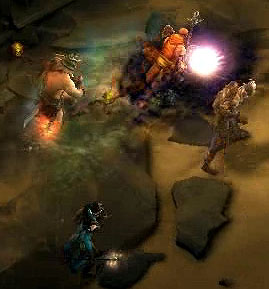 As of the beta test, the Friends List is integrated into the game creation options. A buddy on your Friend's List can see if you are online or in a game, and can join into your game instantly. Players in the same game can also instantly create a new game together, as the realization of a feature long desired by the developers.[7]

Public games are no longer named and displayed for the joining, as they were in Diablo I and Diablo II. Many fans have complained about this, but Blizzard has insisted that their automated system, which will sort characters into games with other characters of the appropriate level, is a superior solution to this issue.

While the multiplayer aspects of Diablo III are essential, the game is basically developed from a single player point of view, as Jay Wilson explained in a September 2008 interview:[8]

Jay Wilson: For us it's a little bit more focused on the singleplayer, it's not quite the same as StarCraft. I've played RTS games before and I've seen people do it both ways and I seem to prefer the method where you work on multiplayer first, because you're really establishing the core game mechanics.

For us, a lot of the core game has actually come out of singleplayer, but what we've done along the way, is we've always had cooperative play enabled. So people play cooperatively all the time. Any time anything does work for cooperative play we fix it right away. So any mechanics that don't work, any kind of balancing or tuning that needs to be done, we try to do it simultaneously for both – but we do focus on single-player more.
Retrieved from "https://www.diablowiki.net/index.php?title=Multiplayer&oldid=47008"