The most players allowed in a regular PvM game of Diablo III is four. This figure was suggested[1] early in the game's development, but the D3 Team did not confirm a hard cap of four until much closer to the final release. Since Diablo 2's max limit was 8, Diablo 3's much lower figure spurred a lot of fan debate.[2] The D3 developers were unmoved though, and stood by their conviction that everyone in a game should play together in the same area, and that four players on the same screen was the limit for controlled, orderly gameplay.

There is no raid style content in Diablo III, or any support for raid games or larger parties, at least not in PvE play. Some content with higher player caps might be added post-release or in an expansion, and many players have asked for other game modes, or support for guilds or clans where more than four players could interact at once, in something like a guild hall.

The hard cap for PvP games is not yet finalized. 3v3 games were the default during the BlizzCon 2010 demo, while in the BlizzCon 2011 demo that number had increased to 4v4 in the Battle Arena. The final figure has not yet been revealed. 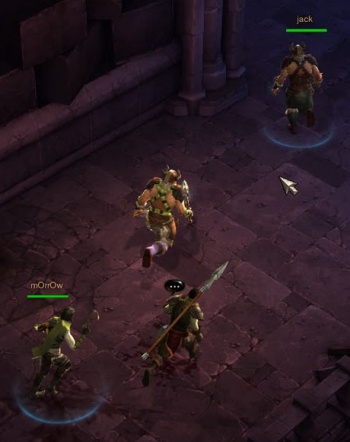 Three players and a Templar.

The maximum number of players fluctuated throughout Diablo 3's development, though the developers were leaning towards four or five right from the start.

There is no technical reason not to allow up to 8 (or more) players in a game; the issue is fun and playability. Not how many can, but how many should. The ideal, not the possible, as this collection of quotes from the developers illustrate.

Though the team hasn't decided how many people will be in a group, Wilson said to expect four to five players.

We’re a little bit worried that if you go up to too many players that you’re not really going to be playing together anymore. We want to make sure it’s a great co-op experience where you really play with the people you’re with, so we’ve just got to experiment and figure out what the optimal number is.

Jay Wilson: It grows more and more set all the time. In Diablo 2, eight player games are very uncommon, and they wouldn’t be in the same party or the like and we have just found that it’s not as fun as with four people. We have the ability to set any number we want, but four seems to work out very well.

Kevin Martens: For the maximum number of players in a game, we're going with 4 now. That's how many you can have on the games on the show floor. That's not final, and we'll keep looking at it during development. On PvP, we're going to do more on that, but we're not really showing any of our ideas yet. We're more focused on co-op at this point, and we want to make people play together more. The loot drop is one example. Now when loot drops the first pass on items is all for you, and only if you pick things up and put them in your inventory, then drop them, can your friends see them or pick them up. Also on multiplayer, the code's very good already and very smooth, and we will keep it that way all through development. The multiplayer is very fun and we're going to keep it at the highest possible polish.

Julian Love: The important part about how many people can play together is not technical limitations. It's about how many is fun. How many effects are going off, how much chaos is on the screen. Our testing is trying to find the sweet spot for those considerations. We have fantastic programmers, and technology has come a long way since Diablo 2, so we're not limited on that front.
Retrieved from "https://www.diablowiki.net/index.php?title=Maximum_players&oldid=46609"