Since Diablo3.cz was founded in 2005, it is the oldest website about Diablo 3 in the Czech Republic. First, there were articles about how Diablo 3 could look like -- there was a lot of unofficial information and speculations. Over time, it started to change. The closer the official announcement of Diablo 3 (WWI 2008) was, the more people were interested in Diablo 3. Finally, on June 28, 2008, Diablo 3 was announced. The site changed dramatically but the information wasn't organized very well. Therefore, in June 2009, another big, and also the last, change arrived - every piece of information was revised and updated.

There are several ways how visitors and fans can express their ideas and opinions about large variety of topics. There is a discussion board, where topics about previous Diablo games can be found, too. On the website, people can leave comments on the news, and finally, there is a Diablo3.cz Facebook page. 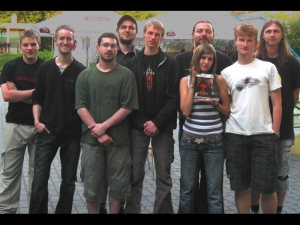 Group photo of the crew. From the 2010 Anniversary project.

The main admin is called James. He keeps the site updated and is also in charge of coding. Some other editors, such as Garn, Sigurn, Hannibal or Zenit, help out with the news occasionally. There are also many other people who help generally with the administration of the website.

To prevent from stereotype, this website changes its design periodically. Every winter, there is a special redesign. Usually dark and gothic style changes into bright and snowy style.

Diablo3.cz was cooperating with Vokr.com from 2005 to 2009. Since 2006 it has been cooperating closely with Diablo-3.net, and since 2009, it has been supporting DiabloWiki.net, as well as received support in return.