Cinematics or cut-scenes are movies seen in the game, or released as promotional tools, that tell the game story, introduce new characters, or just generally serve as promotion or advertising. Blizzard has a long history of producing high quality movies through their in-house Cinematics Team, and these have been included with every game they've released since WarCraft II.

Candles are lit in the intro cinematic.

These were produced in the game engine, machinima-style, and debuted with each of the final three classes, at Blizzcon in 2008, 2009, and 2010.

Though many fans requested them, Blizzard declined to retroactively create machinima-style introductory cinematics for the Barbarian and Witch Doctor as they thought it would be too much effort for little purpose.[2]

Players will view short cinematic intro movies for all five classes, in the final game. These are created with voiceovers from the characters themselves, and feature 2D style animation similar to that of the "Deckard Cain's Journal comes to life" as seen in the full game intro cinematic. 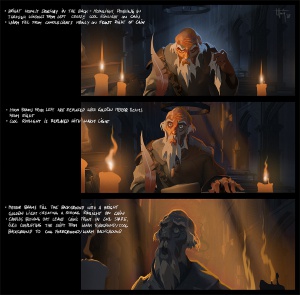 There will be extensive cinematics in the full game, approximately twenty minutes of them, divided up into multiple short films which will be viewed before the game, after each act,[3] and after the final battle, much as they were in Diablo 2. Kevin Martens and Julian Love commented on that during a Blizzcon 2009 interview: [4]

Diii.net: Can you comment on the cinematics? The overall length and presentation? When will players see them during the game, and how long will they run for?
Kevin: That’s not really been decided, since they’re still a work in progress. Currently the plan is to show some at the beginning and end of each Act, but the exact structure isn’t yet finished.

Diii.net: Any idea how long they’ll be in total? Comparable to D2?
Kevin: We really don’t know yet, since all of the scripts aren’t finished.

Jay Wilson also addressed this subject during a press conference at Blizzcon 2009. [5]

We're using cinematics to about the same level as Diablo II did.

It's a difficult story to tell with cinematics because we basically have a main character who can't be in the cinematics. We've really focused on the ancillary characters - Their focus is always to be kind of implying the player's presence right outside the room on the other side of that door.

We don't have a big focus on in-game cinematics. We try to tell our story through action, through questing, and through events. We do have a lot more scripted events, but we separate those from in-game cinematics in the fact that we don't pull control away from the player.

Since that time, the preview of The Black Soulstone cinematic and the Diablo III Introduction cinematic have shown two of the five full cinematics, to the satisfaction of most fans.

The D3 Team considered including more cinematics in the game, using the in-game engine, as is done in Starcraft 2. This was ultimately rejected for various reasons, as detailed by Jay Wilson in August 2010. [6]

The team debated implementing realtime-cutscenes using the game engine (as is done in Starcraft 2) but scrapped the idea since it would have been too much work. There are too many characters, too many NPCs, and with five classes, times two for each gender, plus 18 different armor sets/appearances.

Beginning with World of Warcraft and continuing into Starcraft 2 and Diablo III, Blizzard has produced two types of cinematics.

The traditional, fully CG cinematics are animated short movies about the games. These are produced by the Blizzard cinematics team in much the way a movie company like Pixar creates their feature films, and while these movies originate from the same concept art and designs as the rest of the game, almost all of the artwork and environments are created from scratch for the films.

The newer type of "cinematic" that's been used extensively to promote World of Warcraft and now Diablo 3, is created with the game engine itself. This technique is known as Machinima, and players can make this type of movie themselves, simply by recording what their character sees as they play. The better fan-made movies are created with the assistance of third party tools, and include soundtracks, dialogue, and sometimes even original special effects and animations. One fine WoW example can be seen here.

Red vs. Blue, A fan-made series using the Halo game engine, has become a huge internet success, with episodes even being sold on DVD with the consent of game publisher Microsoft.

The fact that players never have the "first person" view while playing Diablo 3 (unlike WoW machinima movies) is probably what's led to some of the confusion, and various members of the Diablo 3 team have repeatedly had to explain[7] that those movies are not "true" cinematics. [8]

Joystiq.com: Monk introduction cinematic was choppy in a few places, it looked a little rough. You know, usually Blizzard's cinematics are so gorgeous and everything looks like it's out of a CGI movie. Was that put together in-game? How did you guys create that?
Leonard Boyarsky: Yeah, that's an in-game done by our AV team. We have two different ways of doing them. A lot of times when they announce patches for World of Warcraft, you'll notice that they'll do in-game ones as opposed to full-on cinematic ones. That's what that one was. Same with our Wizard one last time. They were developing that as we were developing a lot of his skills. I think they did a really good job with the limited tools that we allowed them to have at the time. [laughs] But I thought it was really cool, myself. But I know what you're saying.

Yeah, there were a few times where you were like, "Oh, it's a little choppy" or some of the characters in the background looked all the same, you know. They're facing the same way, moving the same way.

Kevin Martens: They didn't get the assets very early; they didn't have more time.

The mysterious meteor hurtles towards the Tristram Cathedral in a scene from the Diablo 3 introductory cinematic.

There are two cinematics in Diablo II: Lord of Destruction. The intro cinematic as well as the final ending cinematic, with the destruction of the Worldstone by the hand of Tyrael.

These are some of the original Diablo II trailers and commercials. Some of these have been largely forgotten.

As Diablo I came out in a time before video games were widely advertised, there's no Diablo I commercials, but there are deleted scenes that were made, but never added to the game!

As mentioned above, Diablo I came with deleted scenes. It's not clear why some of them were removed, but they still exists in the game files, and as such are shown here. They have never officially been released.