The Torture Chambers of the Mad King (quest)

The Torture Chambers of the Mad King was the only quest in the Halls of Agony, the first dungeon of the BlizzCon 2010 demo. It wasn't a proper quest, and is widely assumed to be something the developers created for the demo, and not a quest we'll see in the final game.

The Halls of Agony were a red-tinted, hellish dungeon filled with torture chambers and gruesome pools of blood and marked by flaming pits of coals. The level was filled with zombies and undead of every kind, including massive Unburied. Cultists of various types were frequent enemies as well. 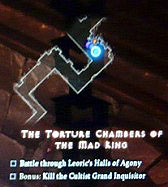 The objective of this quest was simply to exit the dungeon. An optional bonus mission was to find and kill the Cultist Grand Inquisitor. There was no reward granted for "completing" the quest, other than moving on the to next level, the Highlands Passage.

The quest display in the quest window game was quite simple:

The Torture Chambers of the Mad King

Exiting the dungeon was not a trick or a challenge, though it did require some exploration, since the random level generator scrambled it around each game. There was no key required or any sequence of levels or hidden doors or anything of that nature. Players just had to move through the large, hellish dungeon and find the exit. The fastest way to find the exit was to move around the perimeter of the level. That was not a good way to find the Cultist Grand Inquisitor, though, since he and his pack of minions were always somewhere in the middle of the large level.

A selection of images from the Halls of Agony.