The Quest Interface has changed greatly during Diablo III's development. From early pop up messages to a full interface panel, the system has evolved steadily, and the final form is not yet known.

The most recent version was seen at Blizzcon 2010, where the Quests and Lore shared the same window, with tabs on top to switch the view. The quests portion appeared to be well-iterated, with bullet point quest objectives in the main display, and some story flavor listed below. The Lore window, on the other hand, was brand new and entirely unpopulated by info, though icons for: Latest Quest, World, People, Beastiary, and Tutorial Page were visible down the left side of the window. 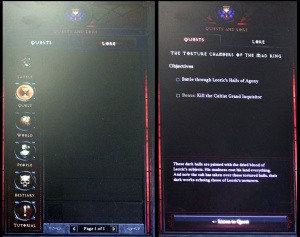 The quest interface remains under development, as evidenced by how much it changed between Blizzcon 2008 and 2009, with further major changes seen in 2010.

The 2008 version was more ornate and stylized, and filled up much more of the visible screen. In 2009 the interface was far simpler, and looked like a scaled back version of Diablo 2's quest window. The very plain 2009 version was clearly a work in progress, since it was hardly large enough to even display the few quests available in that demo build.

In the 2009 build, the main quest was to find Alcarnus, and that quest always showed on top of the pyramid of potential quests. Below the Alcarnus quest were two two other quests, which were different each game. There seemed to be 4 or 5 possible quests for those two slots. Below those two were four other quests, which were related to/contained within them. This third row of quests were generally the most simple, "Fed-Ex" style of quests. Players had to five stranded NPC soldiers and fight off the Lacuni that were attacking them, or locate an abandoned wagon and retrieve the treasure. These were simple, but at least there were none of the dreaded, "Go fetch me 8 skins of the desert monster" type quests that RPGs such as WoW have made so infamous.

When a character performed an action that changed the state of a quest, such as receiving a clue from an NPC, finding a quest item, or finishing a quest entirely, a little ! icon popped up over the belt interface. That let the plaeyr know to open the quest window, where new info about the quest would display. That image is seen to the right.

(All of these images were taken from cell phone camera recordings of the game screens, mostly from the 2009 PAX convention, hence their low quality.)

One change made during development was the location of quest items. In Diablo II these were stored in the inventory, and "used" up when you completed a quest, at which point they vanished. You had to have them for the quest though; if you dropped or lost the item then you had to redo the whole quest to get a new one.

This system carried over into Diablo III, though as of 2008 there was a special "Quest Items" tab in your character's inventory. Quest items were automatically placed in that inventory space, from which you could not remove them. (Though they would vanish once you completed the quest or abandoned it.) The utility of this window was questionable, since after all, if you couldn't pick up or use the items in any way, what was the point in being able to hold them at all?

It was thus not a surprise when that aspect of the game was switched around, as Bashiok reported in October 2010:[1]

Quest items are now stored directly within the quest itself. They don’t take up any space at all.

The quest items may still be viewed, but they are shown via the quest window interface, not the paper doll/inventory.