A screenshot or screen dump is a direct duplicate of what is shown on screen at a given time. Most games, including all of the Diablo titles, allow these to be taken while playing the game, with the use of the "Print Screen" keyboard button. Screenshots can also be taken with various external programs, many of which will also record movies of the game, or can be set to take screenshots at timed intervals, rather than manually.

Blizzard has released hundreds of Diablo III screenshots, showing off the various characters, monsters, levels, and skills in the game. There have been a lot of screenshots, however they only show a few limited areas of the game, and all the things seen in screenshots have been seen elsewhere; in gameplay movies, or especially in the playable demos at BlizzCon 2008, 2009, and 2010. In this way Blizzard shows off a lot of images, while actually showing very little of the game.

This can be frustrating to fans who have seen all of the images and want more, but at the same time it is preserving quite a bit of surprise and mystery, since so much of the game remains unrevealed.

More new areas of the game, more spells, more monsters, and more everything will be revealed over time, but the Diablo III developers are clearly enjoying the slow run out, knowing how much they're holding in reserve.

Countless images taken from Diablo 3 screenshots fill the articles in this wiki. The small page format of a wiki doesn't allow for proper appreciation of quality images though, so it's recommended that interested fans seek out the full sized screenshots. 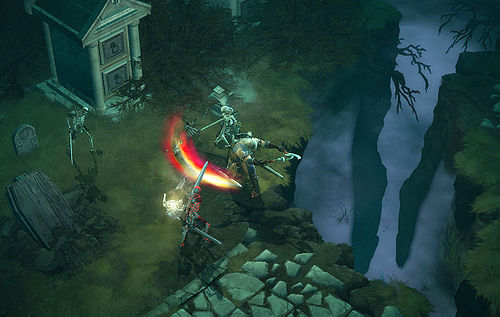 The Barbarian smashes some undead in a graveyard in Tristram.

The best collection of Diablo 3 Screenshots can be seen in the image gallery of Diii.net, the leading fansite. They have archived every single released screenshot, as well as taking hundreds of screencaptures of the various Diablo 3 Gameplay movies. All of the images have informative captions, as well as tags enabling viewers to sort them by the areas, characters, skills, monsters, and other things shown in them.

Diablo III Screenshots: Act One -- Images showing off areas in Act One of Diablo 3; chiefly (so far) Tristram and the dungeons beneath the Tristram Cathedral.

Diablo III Caravan Screenshots -- Screenshots of the Diablo 3 Caravan, the traveling town of NPCs that accompanies the player between acts.

Diablo 3 Jigsaws -- Huge images compiled from dozens of screenshots, showing map-like sweeps of the game area. (These are very difficult to create in Diablo 3 since the 3D perspective magnifies images near the center of the screen.) 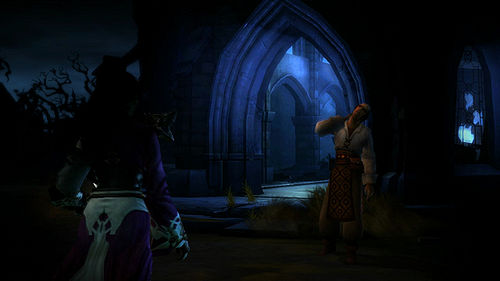 The Wizard enters the Tristram Cathedral.

In addition to stand alone screenshots, Blizzard has released several high quality gameplay movies, showing extensive monster-bashing and rainbow-watching. Screen caps of these aren't quite as high quality as the screenshots, but they are still quite nice, as well as informative of the game, for those who haven't had the chance to play yet.

WWI 2008 Gameplay Movie -- The first gameplay footage of Diablo 3 ever shown, this huge 15-minute movie debuts the Barbarian and the Witch Doctor.

Wizard Gameplay Movie -- The Wizard makes her debut with plenty of spell-casting action.

Artisan Movie -- The Artisans make their debut in this film, narrated by Game Director Jay Wilson. This movie is more an informative presentation than an action-fest, and the information presented in it is completely integrated into this wiki.

Thus far, Blizzard has only shown off a tiny amount of the gorgeous, pre-rendered cinematic visuals for Diablo III. Less than two minutes of it, in a movie released with the game's debut, in June 2008.

Ureh as seen in the Cinematic intro.

In addition to that teaser cinematic, they have produced Machinima-style "cinematic" movies to introduce the Wizard and Monk characters, with one for the fifth character coming at BlizzCon 2010. These movies combine gameplay with short, narrative films created with the Diablo III game engine; these use actual game art assets, which were created to be viewed from above, in the isometric PoV that the Diablo series has made famous.

These machinima films are just for promotional purposes; there will not be cut-scenes in that style used for the storytelling in the game. They are in many RPGs, and were in Starcraft 2, but the developers felt they would not work well in Diablo III since they would have to be individually tailored to the five characters. The story will instead be presented through game events, and in full quality, pre-rendered cinematics.

The following galleries contain dozens of high quality images from each cinematic movie. You can also view the files on YouTube, albeit in lower image quality.

Monk Cinematic Debut -- The Monk battles Cultists in Alcarnus, plus a boss fight with a Mage. Blizzcon 2009.

The Rogue looks ranger-ish and shoots things with arrows. Blizzcon 2010.