Is Diablo a girl? Or more specifically, does Diablo inhabit the body of a woman in Diablo III? Yes, in fact. As revealed in the game's story, Leah is the human form that Diablo possesses and transforms into his usual red and spiky engine of destruction.

The build up to this revelation was an interesting one, as fans got clues and hints about the fact that Diablo might be "a girl" this time around. That was a major point of debate and discussion during much of the game's development. The difference in appearance is fairly subtle, with the same red color and spikes and similar spells to those he exhibited in Diablo II. But there is also a bit of a womanly shape and swing to "his" hips, and breasts are sort of visible, especially during the cinematic seen before Act 4.

The following sections cover the theories advanced at various milestones during the game's development, mostly triggered by clues and hints offered by the developers. 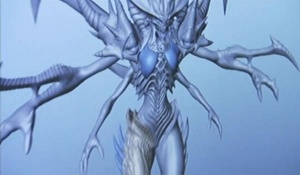 The concept of Diablo as a girl first surfaced in August 2009, when previews of the Diablo III cinematics showed an unfinished version of Diablo with a surprisingly-slender, female shape.[1]

The concept was not rejected out of hand. After all, we don't know what Diablo's true form is, since "he" has only been seen in the mutated form of a (male) human host in previous games in the series.

Diablo possessed and transformed the body of a young boy in Diablo I, and while the Dark Wanderer was officially a man in Diablo II, "he" could as easily been female, had the Rogue been named the official slayer and soulstone possessor. Would that have greatly changed the appearance of Diablo in Diablo II, where he was more quadrupedal and lizard-like than his "man in suit" appearance in Diablo I?

That said, while some fans argued for the female interpretation, most people assumed it was confusion brought on by early, work-in-progress artwork. Surely, their logic went, the finished model in the game would have spikes and scales added, which required that the base skeleton and skin was slender, to leave room for the ornaments.

The question of Diablo's gender died down for a couple of years, before the BlizzCon 2011 poster reignited the debate.[2] The view of Diablo from the shoulders up looks much as we'd seen in numerous images, but from the shoulders down, things were different.

As many fans were quick to point out, those are some child-bearing hips. That concept established, the conversation soon turned to speculation about which female human might prove to be Diablo's host.

Leah was indeed the object of his possession. The following details the reasoning fans engaged in prior to the game's release:

If Diablo does possess a human female this time, Leah is the most popular choice for his female victim. Speculative evidence for this, quoted from a news post on Diablo.IncGamers.com.[3]

The rumors grew much more believable when several of the Diablo III developers made no effort to deny this when asked about it during interviews from BlizzCon 2011. For instance, here's Julian Love.[4]

GameFront: You’ve been using the pronoun “he.” Is Diablo definitely male?


Julian Love: You know, demons don’t really have a gender.
GF: There’s a theory going around that Diablo may be female, based on the art we’ve seen. With the newly revealed Black Soulstone cinematic, I’m sure people will wonder if Leah will become the new Dark Wanderer and host to Diablo, explaining Diablo’s feminine features.


Julian Love: Play the game and find out.

The biggest question that no one has answered is where or how Diablo can even return to action. After all, Diablo II saw Andariel, Duriel, Mephisto, Diablo, and Baal all defeated by humans in the mortal realm. They are not dead and gone, surely their spirits live on, but Blizzard has introduced the Abyss as a ghostly realm where the defeated spirits of the demons are banished. After all, they can't simply go back to the Burning Hells, or dying in the mortal realm would be no handicap at all.

So how could Diablo (and possibly some of the others as well) return from the Abyss? Possibly by infecting a human host? That just begs the question of how the human would get into and then back out of the Abyss, but the writers could obviously craft some scenario to explain such an operation.

Another possibility is that Diablo is female, but that his host is not human.

As the Diablo III Introduction cinematic makes clear, the prophecies of the end times promise not only a demonic invasion of Sanctuary, but a resumption of open warfare between the hosts of the High Heavens and the demons of the Burning Hells. Could one female Archangel, not necessarily Auriel, be captured, or stray into the Abyss, and thus fall prey to Diablo's possessing ways?

There's no reason to expect such a development, but it would be an interesting plot twist, and would give a good reason for Diablo to be stronger and more powerful than ever before. He'll need that strength, as the destruction of the Worldstone means that humans are growing stronger as well, as they regain the ancient might they'd have grown to in the days of the Nephalem, had not the Worldstone stunted their evolution.

The plot twist was formulated by some of the story writers, and brought to the full team in something of a surprise presentation early in the game's development. As reported in interviews on the Behind the Scenes DVD, it was a shocking revelation that allegedly caused two of the developers to walk out of the room, and spurred much debate and art evolution to make Diablo look spiky and red and dangerous, but also with a feminine aspect.

Bashiok commented on the issue in July 2012, post-release.[5]

When I first found out years and years ago, I have to agree I was pretty shocked. The concepts were still very much in flux, and the artists took a lot of time to really explore who Diablo is. Being the Lord of Terror, the most terrifying thing to everything, everyone, for all time, maybe it doesn't make a lot of sense that he's always just a big red demon, but could take on any number of forms of "terror". That kind of malleable image then seemed to make a lot of sense to me that it might include traits from its host, that there is no 'pure' form for the prime evils, and much like evil itself, is constantly shifting in appearance. But that's just my take on it.

Some details on the design decision and the internal controversy over it are presented on the Behind the Scenes DVd. Skip to 19:02 to see a minute of coverage of that

As explained in the final game story, Leah was the daughter of Adria and Prince Aiden, but she was conceived after the events in Diablo I, when Prince Aiden (who was Met-conned as the Warrior hero) defeated Diablo and then (metaphorically) drove the soulstone into his forehead, in an (ultimately unsuccessful) effort to contain the Demon.

As Adria's journal relates in the game, she slept with Aiden on his last night in Tristram, when he was already becoming the Dark Wanderer. Leah was therefore conceived as a mixture of human and demonic, with all the power and potential of Diablo's might within her. That explains the powerful latent magical abilities she struggles to contain and control throughout Diablo III's story. It is not clear how Leah would have fared in controlling her magics and remaining free from the demons if Adria had not betrayed and destroyed her with the Black Soulstone; perhaps Leah would have been inexorably drawn to the demons even without her mother's treachery?

As related by Adria prior to Act Four, she was secretly serving Diablo all along, and preparing the Black Soulstone as an object of power, to contain all the essences of the Lords of Hell, including Diablo's The plan was to pour these powers into Leah, transforming her body into Diablo's new form as the Prime Evil, with the powers of all the other demons as well as his own.

The plot worked as planned, but ultimately the demon was not powerful enough to withstand the human hero, and was destroyed in the end, though Adria escaped and the Black Soulstone remained intact and was lost when Diablo's form burned away after his defeat. The fate of Leah is not known either, and may be resolved in D3X or D3Y.