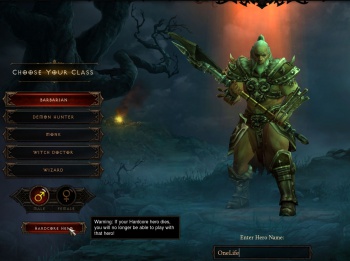 Hardcore characters are exactly the same as regular characters, except that they are mortal. When they die, they stay dead. Forever. No restarting in town; no restarting anywhere. The infamous "deeds" message displays upon death, so players are never in doubt as to their fate. Diablo III added a Hall of Heroes where players can archive their dead HC characters, though only to look at them as they were at death; not to access any of their gear or inventory.

Hardcore and Normal (or "Softcore") characters are kept completely separate on Battle.net, and can not interact, trade items or gold, share stash space, enter the same games, etc. Even on the same account, HC and SC are totally separate and a player just starting out in Hardcore will have zero gold, have to train up all their Artisans and buy stash space, etc.

There are no differences between Hardcore and Softcore characters in Diablo III or Reaper of Souls. There were in Diablo 3 Vanilla but only in terms of the Auction House, which did not include Currency trading for Hardcore. The differences that exist are created by players, since Hardcore characters generally need much higher hit points, resistance, etc, to boost their Toughness for survival.

Some of the difficulty differences in D3v2 and Reaper of Souls put pressure on Hardcore play, as many desirable things in game such as Legendary Materials, Death's Breaths, etc, drop more often on higher difficulty levels. Legendary items drop more often on higher difficulty levels, and there are some special items, including Keys and Demonic Organs required to create Hellfire Rings that only drop on Torment difficulty, this is more of a hurdle for Hardcore players to clear. 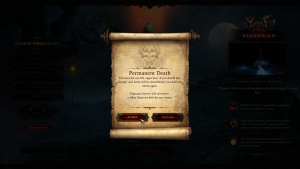 After much debate pre-game,[1] the Diablo 3 developers ended up requiring a softcore character raised to level 10 as a prerequisite to creating a Hardcore character.

This minor inconvenience was something the developers felt was necessary just to keep a brand new player from creating a Hardcore character without knowing the first thing about the game or the consequences of the act. (In Diablo 2 players had to beat normal difficulty first, which was annoying when creating a new account purely to stick Hardcore mule characters on it.)

Once the level 10 softcore character requirement has been achieved, players can delete that character and play only Hardcore, if desired.

Hardcore and Softcore are kept entirely separate, but their trading limits (from Bind on Account items) are identical in D3v2 and Reaper of Souls. In Diablo 3 vanilla when the Auction House was active the HC and SC Auction Houses were kept entirely separate, with one key difference. Real Money Trading was incorporated into Softcore, but not Hardcore.

Softcore characters could buy and sell items for real currency via the Auction House, not just gold. Hardcore could not, though this just caused players who wanted to involve real money in the equation to use Third Party Sites, including gold selling sites. Which was just the sort of thing Blizzard created the RMAH to prevent.

With the shutdown of the Auction House in D3v2 and RoS, and the fact that all top quality items, materials, and gold are now Account Bound, third party site sales are no longer an issue for Hardcore or Softcore.

The character is mortal and therefore death is final. The items on the character's body are lost forever as are the items in your inventory (backpack). Your items do not pop off your body onto the ground when you die so a friend can not pick them up to pass onto you later. It is all gone.

The items in your Stash are not lost, and can be accessed by any other Hardcore character on the account. Experienced HC players regularly dump all of their gems, crafting mats, spare items, etc, into the stash so they will not be lost in the event of death. 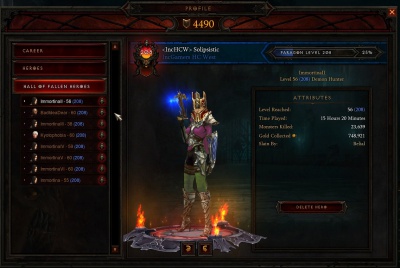 When a Hardcore character dies the player is given the option to enshrine them in the Hall of Heroes. This menu is accessed via the Profile options in Battle.net and shows the characters as they looked at the time of their death, displays their total time played, the number of monsters killed and gold collected, and what monster killed them.

This is better than nothing, but the display does not record the skills and passives they were using when they died, and their gear can not be inspected. During much of Diablo 3 a bug allowed players to peek at the gear of dead HC chars in the Hall of Heroes, but this was patched out in Reaper of Souls.

Third party sites such as Diablo3Ladders.com that track character levels and gear can be used to view what a dead HC character had when they were last saved/viewed via the site, but this may not be updated to their final gear set.

As of Reaper of Souls (with proper Arena PvP still a distant dream) Hardcore brawling works exactly the same as softcore Brawling. Neither is a popular game mode, but in both cases death is not permanent and brings no experience or item durability loss. Fans have long anticipated a full Arena Deathmatch style of PvP, as we saw in the Blizzcon 2009 and 2010 demos, but as of RoS this is still not a feature in the live game. If/when it appears, Hardcore players hope they will be able to take part without permanent consequences.

After two years of often bitter debate, the Diablo III team changed their initial plans, and announced at BlizzCon 2011 that Hardcore characters would no longer "die" when engaging in Arena PvP.[1]

Wyatt Cheng: Our current position is that you don’t die in PvP in Hardcore mode. So what happened in Diablo II is that anyone who wanted to do Hardcore PvP would basically level a character to level 10, and then they’d find another level 10 character, and they’d fight and one would die. That’s just not really that interesting. So we’re just going to let players engage in PvP.

Arena PvP was not included in Diablo 3's launch, and when brawling was implemented in late 2012 it treated Hardcore just like Softcore, with no permanent deaths. (Though there were numerous dangers with bugs that could result in death in town just before or after leaving the Brawling arena, and those were permanent for Hardcore players.)

When Hardcore Arena access was first revealed in 2009, and all through 2010 and most of 2011, the design was set to mirror Hardcore play in normal games; if you died, you stayed dead. The details were never revealed; if it was literally as soon as a character died, or if there was some condition for the losing team dying at the end of a timed match, but the concept was clear.

Jay Wilson enthused about instant perma-death Hardcore dueling at Blizzcon 2010, and @Diablo repeated that in November 2010. [2]

If you PvP in hardcore and you die, you’re dead. Hardcore PvP leader board is going to be... hardcore! --Diablo


''Yeah, it’ll be hardcore, but it undermines your Arena design. How can you have 3 rounds if you die forever in the first one? --NocturneGS


It doesn’t undermine anything. Although I would expect it to become most popular at specific skill tier unlocks. --Diablo

Cracks in the armor of this opinion began to show in mid-2011, when Jay Wilson alluded to internal conflict on this issue. He said that some of the "strike team" were arguing for a non-permanent death mode for Hardcore dueling, since they feared it would just result in HC players never getting to duel with their own characters.

This has proven a very contentious subject, with strong opinions on both sides. The argument largely breaks down to a "realist vs. idealist" conundrum.

A few sample threads where this argument was threshed out in 2009 and 2010.

Diii.net ran a vote on the issue in November 2010, which spawned another long comment thread of people on both sides of the issue. The vote results:

After months of "probably" type comments, Hardcore was confirmed as a Diablo 3 feature in August, 2010. Here's a brief timeline of official statements on the subject.

From the Diablo 3 Design Fundamentals panel, at the 2008 WWI event:

Q: Will there be Hardcore mode?
A: We haven't decided yet, but I don't see why we wouldn't. It’s not a decision we need to make yet. We probably will, though. 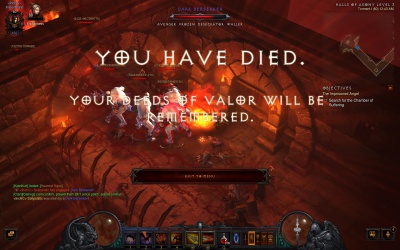 Hardcore death with the "deeds" message.

Question: Has anymore thought been put into Hardcore? Are any features decided-upon?
Bashiok: I think the last thing I heard from Jay on it in public was something along the lines of “Ok fine we’ll just commit to a hardcore mode here and now” outside of that no details have been released.

In an interview with GameSpot AU, Jay Wilson confirmed that Hardcore is definitely returning to Diablo III.[4]

Hardcore is definitely returning to Diablo III, but we haven’t decided what sort of special Battle.net features we’ll enable with it. We want to make sure that if you see a HC char on B.net, you’ll know they’re HC. It’s a status symbol, and it’s only one if you know. We’re looking for ways to reward players, and we’re sure we’ll have a set of HC achievements also.

How HC chars will differ isn't yet known, but the D3 Team has repeatedly said they'll be set apart from regular characters in some obvious fashion. [5]

Will hardcore characters be more powerful than normal? --Spectrusv
No intent, no. But they’ll definitely have more prestige and flashy things to show off for being so awesome. --Diablo

This promise was not actually fulfilled, and Hardcore characters in game or on Battle.net chat do not look any different than Softcore characters. In fact, players often have trouble telling their HC and SC chars apart, with only an added overhead red light setting Hardcore apart in the character selection screen.

This concept was initially floated in a forum post by Blizzard's Diablo 3 Community Manager Bashiok, in July 2009. [6]. Reaction from the Hardcore community was fairly outraged and almost entirely negative[7], and when the issue came up again in April 2010, Bashiok said it had been pretty much ruled out.[8]

Paying to bring back a fallen hardcore character was something I read someone here post once, and I simply repeated it to say I thought it was an interesting idea. I’m not a designer. Things I find interesting doesn’t mean they’re being implemented. I have though heard Jay (who is lead designer) say that paying to bring back hardcore is pretty much a horrible idea.

Players were hugely opposed to this in theory, and it was never implemented into the game in any fashion.

With the introduction of the banner system, hardcore characters now gain a bit of prestige in the form of added decoration options to a hardcore player's banner, including bloodied skulls littering the base of it.

Hardcore players are not receiving a gentle treatment, much to the delight of fans. There will be certain tweaks to the game that may make the game even more difficult than the softcore counterpart, such as adding debuffs to bosses that effectively nerf the effectiveness of a player, causing them to have to play even more cautiously than before.

In addition to this, Blizzard has no plans to go easy on hardcore players in the new Inferno difficulty mode, as explained by Bashiok[9]:

We don’t have any plans to restrict or change the game difficulty for Hardcore characters. Surviving the challenges thrown at you by outplaying them is the entire point. Hardcore characters that take on Inferno and survive will be granted cosmetic rewards for their efforts.