note:All mechanics are prone to being changed during development

A Skill is any ability, be it passive or active, characters and monsters can have.
Not every Skill a monster uses may be used by players.

For information on Skills from a specific Character class, see the following articles:

Skills are divided in 2 types: Active and passive.
There are many more passive skills than active skills. At Blizzcon in October 2008, each skill tree had 4 or 5 skills per tier. On each tier, one or two were active and the rest were passive.

All skills can be viewed in one screen, are sorted into 3 distinct skill trees and divided in a number of Tiers.
Skill Trees do not affect which skills of any given tier you can choose to invest in.

Initially, every skill has a hard point cap of 5. A quote from Bashiok on the matter:

Currently we’re envisioning the majority of skills to be capped at 5 points, to begin with. As a form of progression we’re planning for players to be able to increase the point caps of skills. More than likely to a maximum of 15. It’s a system that’s still under heavy design, but the fact of choosing and increasing key skills beyond their initial cap is important to this new unified tier system.

There has been no further information on increasing the cap on skills. 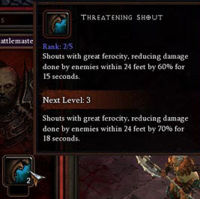 Hovering on a skill produces a visual like the one seen to the right. The name of the skill is displayed, along with the current and maximum points that a character may spend in it. The current function is shown, as is that of the next skill level.

One prime difference from Diablo II is the slot for a skill rune that you see below the skill, in the skill tree. Only active skills have slots for skill runes, and skill runes can be freely socketed and swapped in and out.