Poison is one of the types of elemental damage in Diablo III. It is green in appearance and often appears in puddles or splashes that deal DoT to enemies in the green. Corpses killed by poison weapons or poisonous skills emit greenish smoke.

Unlike poison in Diablo 2, Diablo 3's poison is basically just a green type of damage that deals full damage upon the hit. It does not necessarily have any lingering damage properties.

Poison damage is dealt by a number of Witch Doctor skills such as Poison Dart, Plague of Toads, Zombie Charger, Corpse Spiders, and Acid Cloud. Other skills may gain poison damage from a runestone. Hydra is one known example.

Players mitigate the damage of poison attacks with their Poison resistance. 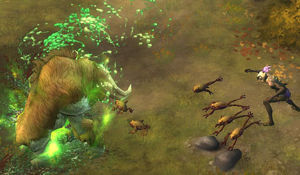 Plague of Toads impact against a Beast.

Though poison attacks often splash and look liquid or appear in puddles of acid, the damage type functions like all the others (except cold) dealing damage at the time of impact but not imparting any lasting health drain (aside from some special skills that specifically list their damage over time).

Special effects from poison damage may return in Reaper of Souls.

During Diablo 3's development, Poison was different than other types of damage, and the green coloration covered poison, acid, and disease effects.[1]

any change in the range of damage types to include holy, shadow, voodoo or anything else to match the classes? —Scyberdragon

Whats the difference between poison and disease damage?—WickedBubba
Disease has a damage debuff (both intake and output), and poison has a health debuff (regen/heal). Subject to change of course.—Diablo

Is there much difference between poison and disease? They’re both internal maladies that hurt over a period of time.—Grug


Fairly significant in their difference, but both countered with a single resistance. Damage/resists aren’t design complete though.—Diablo