Item trading was an integral component of Diablo II, allowing players to securely exchange multiple goods by placing them into an inventory-like screen before verifying the trade. For Diablo III, Blizzard wants to place a much higher emphasis on item trading. Since players can now see the damage-per-second (DPS) and sell value of each item, players can also make more informed decisions about trading.

It is currently unknown how (or if) trading will differ from Diablo II, or if Diablo III will incorporate feature such as auction houses to facilitate easier item trading.

Nothing has yet been confirmed, though the D3 Team has said they didn't like the trading interface of Diablo II, and that they'll look to improve upon it. [1]

Bashiok:I think the "dump everything into a trade window" was awful, I'm sure the designers agree, and if there's a desire to look at someone else' items then there needs to be a way to do it properly.

Jay Wilson shared a bit more of the team's philosophy on trading in a press conference from Blizzcon 2009. [2]

I can tell you that going into a [Battle.net] chat channel and spamming it is not how it will work. [Laughter in the crowd.] I can also say that creating trade games that get lost in this endless list of other games is also not going to work.

We're going to have some kind of trading system - It could be an auction house; it could be a way to trade items over Battle.net more easily. We don't know exactly what that's going to be. It's probably not something that's going to get decided until we do some serious work with Battle.net.

We consider Diablo III a game all about trade. The best items are acquired in Diablo through trade whereas in WoW they're acquired through raid. So given that, it really moves us to facilitate a really great trading system. 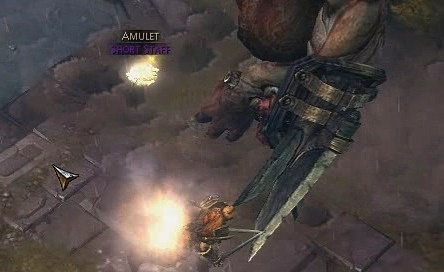 In Diablo III, any dropped items you see are yours to keep. This prevents others from hoarding valuable drops upon the death of a particularly powerful foe (especially Act Bosses). However, many high-quality dropped items will still be unusable by your character class; you may, for instance, have a powerful Wizard-only item drop when you are playing as a Barbarian. You could always sell it for a large amount of gold, which is a perfectly acceptable thing to do; however, perhaps you could get a nice item for your own class. Maybe someone just found something really nice for your character...

The image here shows a rare and a unique (possibly; the colors of loot are not yet set in stone and have changed during development) dropped by Siegebreaker, as seen by the player controlling the Barbarian. Other players in the same game also saw Siegebreaker drop items, but they do not see these items; they see their own items. They can not see or pick up this Barbarian's drop, and the Barbarian can not see or pick up theirs. Thus does "ninja looting" come to an end, after ruling the multiplayer landscape of Diablo I and Diablo II to Diablo III.

A new thing for Diablo III is the inclusion of an Auction House.