The Crown of Mad Leoric 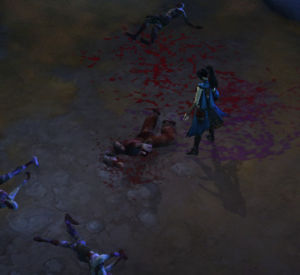 When nearing the Tristram Cathedral the player comes across a group of zombies bent over something. After killing them, the player can click on and speak with the Injured Villager lying on the ground. With his last breath he tells you the story of King Leoric.

The quest description says: "Descend into the catacombs and destroy the arisen Skeleton King and his army of the undead".

Somewhere on the second level of the dungeon, a pair of Cultist NPCs are seen. One of them has The Crown of the Skeleton King, and when killed he drops it for the player to snatch up. This quest item is required to awaken Leoric, when he is found deeper in the dungeon. 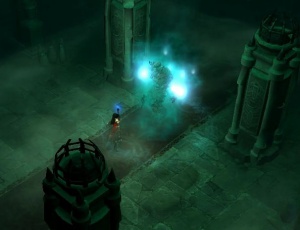 Ghost of Leoric starting up the pillars.

After securing the crown, the player moves down to level three of the dungeon. The ghost pillar room is soon found. Upon advancing into the room, the ghost of King Leoric appears and say: "You dare bring the warmth of life into my tomb!? Prepare yourself mortal to serve me for all eternity!" Leoric then raises his glowing hands to awaken the four pillars.

Skeletons start to appear from everywhere, summoned by the pillars, and the player must destroy the pillars to stop them from generating countless numbers of skeletons. 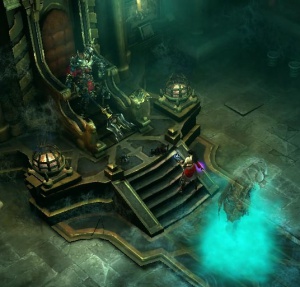 The ghost of Leoric is summoned, and then flies in to his skeleton.

Past the pillar room, players eventually reach King Leoric's throne room. When the player gives the crown back on the king, his ghost is summoned to the bones and he is reanimated. Standing up, armed with a huge club, he laughs menacingly and starts to attack, while newly-summoned Skeletons advance from both sides. The player now has to fight Leoric and his minions. The minions are much easier, and can in fact be a useful digression, since polishing off a pack of them will generally earn a few health orbs.

The quest in the full game will probably give some nice reward, but in the demo, players were rewarded with the message that they had completed the BlizzCon demo. During the tumultuous Diablo III Beta test, A Shattered Crown rewarded the Nephalem Cube, which has since been removed from the game. However, it is at this point that the player first has access to Haedrig Eamon as the blacksmith for all of their crafting needs, and also are then able to salvage items into components.

This quest is reminiscent of the the Butcher quest in Diablo I; both are given to the player by a dying villager encountered just outside the Tristram Cathedral.

That little Easter Egg might have been just for the Blizzcon demo; it's unknown how the quest will be presented in the final game.

Leoric's reanimation and the subsequent battle can be seen from just after the Crown was used to awaken him, in the following YouTube video.