The Crown of the Skeleton King 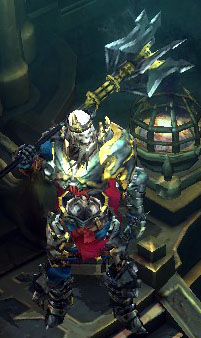 In the 2008 Blizzcon demo, the crown was obtained on the second level of the dungeon from the leader of a group of Dark Cultists. After securing the crown, players had to venture down to the third level of the dungeon and fight their way through to Leoric's throneroom, where the ancient King's moldering bones were perched on a throne.

The crown has a name that is green in color, as do all Quest Items in Diablo III. This is a change from Diablo II, where Set Items were named in green.

Leoric's reanimation and the subsequent battle can be seen from just after the Crown was used to awaken him, in the following YouTube video.