The Skills and Traits window is Diablo III's version of a skill tree. When a player opens the skills menu, only the usable skills with a point in them are displayed. To see the full listing of skills, another button must be clicked to open a supporting menu. This focuses players on their current abilities, and gives a quick view of their available options. 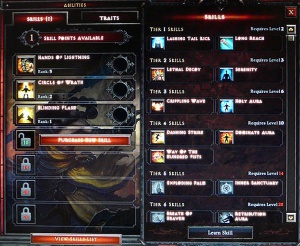 There were skill trees in Diablo III during the first few years of development; they were seen in the playable demos at Blizzcon 2008 and 2009. During 2010 though, the D3 Team reworked the skill interface. They removed all passive skills turning them into traits which were moved to a list in their own display window. Active skills were all that remained in the skill tree, which also became a list.

The new style, circa November 2010, is seen in the blurry cell phone cam shot to the left. This is a listing of the current skills, not the full skill "tree." To see that a player clicks the large red button, which opens up another menu that sits beside this one.

In that menu the full listing of all class skills can be seen, and new skills can be learned by placing points into the available options. 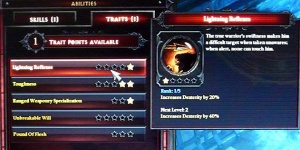 Traits are displayed in the same window, by clicking the Traits tab.

There were around 30 traits for each of the classes as of Blizzcon, though the developers said this number would probably be reduced a bit as the bewildering array of options was streamlined and combined.

Traits can take 1, 3, or 5 points, with the values different for each trait, and all preset. As of Blizzcon 2010 traits were displayed by a star, making them look a bit like a movie review or a user provided website rating. The design will probably change by the final game.

The only prerequisite to use a skill now is meeting a minimum Clvl requirement. All skills are arranged in tiers at Clvl 2, 3, 6, 10, 14, 20, and 26, and players can choose any skills from any tier to use, so long as they don't exceed 7 total skills. Respecs are readily available, making it easy to remove points from unwanted skills as higher level, better skills become available.

It appears that the total skills are limited by Clvl, to equal the skill tiers. Thus a character can only add their second skill at Clvl 3, their third at Clvl 6, their fourth at Clvl 10, and so on. This (if accurate) will encourage players to place multiple points in low level skills, thus concentrating their powers by focusing in a few skills, rather than spreading them around a lot of skills that a new player wouldn't know or remember how to use properly, as well as increasing the powers of individual skills thanks to multiple points spent in them.

The image to the left is blurry and hard to read, but it's the best and only view of the new, Blizzcon 2010 skill/trait window. The tabs at the top switch between skills and traits, and each one shows a long list that must be scrolled down to read entirely.

Atop the window, just below the Skills tab, is a number "0" which shows how many skill points this character has available to invest. Once she levels up, that number will go to 1, and the "locked" skills further down the list will unlock and show their icons, names and descriptions. A character with a skill point views the available skills, clicks a button to learn a new skill, then when the interface expands by a window to the right, the skill may be chosen. Once it's got a point it's automatically added to the active skills, and its icon appears on the 1-4 hotkeys on the belt interface.