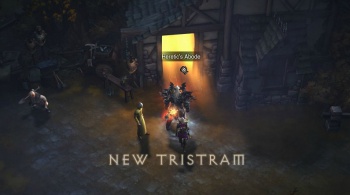 Entering the shack in New Tristram.

The Heretic's Abode is a new area added to the game in Patch 1.0.5, as part of the Infernal Machine event. It is unchanged in the updated Infernal Machine in Reaper of Souls, though in RoS players must open 4 portals within.

The Abode is a single room in a gloomy house, accessed from a boarded up shack in New Tristram, located right behind the Healer. There are no monsters or other events in the house, but it is the only place from which players can activate the Portal Device and create a red portal to the Realm of Discord, Realm of Chaos, Realm of Turmoil, and Realm of Fright (RoS only) where Ubers must be battled and the the various demonic organs *may* be found.

In Diablo 3 vanilla players had to be on the final quest in Act One, with the NPC offering caravan passage to Act Two, in order for the Heretic's Shack to be accessible. This quest status is no longer required in D3v2 or RoS. Note that Heretic's Abode and all related Infernal Machine activities are Torment-only in D3v2, and can not be done on any lower difficulty.

Creating a Hellfire Ring requires multiple steps, and differs slightly between Diablo 3 and Reaper of Souls. Refer to the Infernal Machine article for full details, but briefly:

Here's a quick summary of the steps in this event. See the sections below for full details about everything related to the Infernal Machine.

It is usually necessary to repeat the initial steps multiple times, since keys and organs do not drop every time. Even on Torment 6 they have only a 50% chance to drop. Players can farm for the keys and organs much more efficiently in multiplayer games, both for the faster killing speed and since every player in the game has a chance at each item dropping, and all characters in the game can pass through the same portal(s) to the Uber battles. 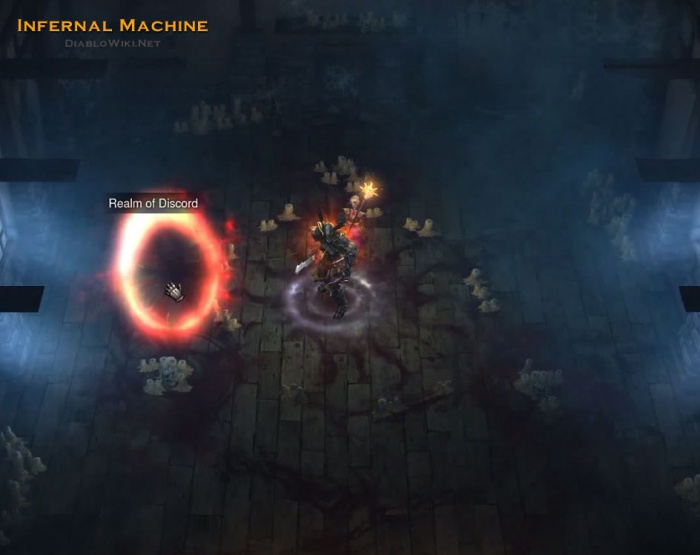 Creating a red portal inside the Heretic's Abode.
Retrieved from "https://www.diablowiki.net/index.php?title=Heretic%27s_Abode&oldid=71862"