An Escort Quest involves escorting an NPC, who may or may not fight with you, to a quest objective.

Are We There Yet?[edit | edit source] 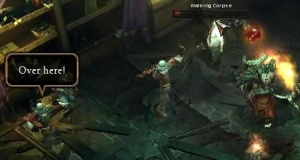 The Barbarian participating in an escort quest.

The difficulty in an escort quest is usually derived from keeping a frail NPC alive, or otherwise achieving a quest objective in time. An example of an escort quest in Diablo III would be the "escort mission" from the BlizzCon demo in 2008, which involved escorting an NPC captain through the bowels of the Tristram Cathedral in Act I, and saving his soldiers. It remains to be seen whether escort NPCs will act as hirelings or not, in the sense that they fight with you, or if that criteria is even applicable/relevant.