The Enlightened Shrine provides a 25% experience bonus for the duration of the effect for 2 minutes. It can last ten minutes if wearing the Gloves of Worship when activating it.

The Enlightened Shrine features in the following achievements:

Patch 1.0.8 improved the function of this shrine by changing it to a multiplicative bonus. [1]

This change makes the shrine bonus larger, especially for characters with a lot of +exp equipment and/or playing on a higher level of Monster Power. The maths, as explained by Blizzard on April 9, 2013: [2]

I’m on the PTR right now and every neph stack is going to the multiplier and not the base bonus experience. Was this intended? If it was, awesome update. Now it’s actually worth it to stack up to experience farm in higher MP levels.

Lylirra: Confirmed: intentional! We know a lot of players were doing runs where they’d play high MP and skip Elites. That’s still an option, but we wanted to make Elites more enticing. This seemed like the best way to do it that worked across all MP levels. Let us know what you think/how it feels! 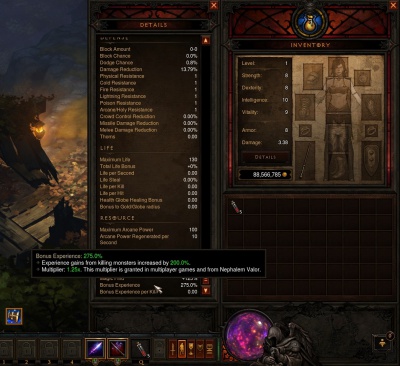 Exp bonus equivalent to a shrine, from the Diablo 3 Anniversary bonus.

For example, prior to v1.07 all +experience bonuses simply added up. For example:

In v1.08 that same scenario would yield:

And the bonus would be even larger with an experience shrine or multiplayer bonus adding to the 75% Nephalem Valor* stacks.

In Patch 1.0.5 Enlightened Shrines could spawn in Inferno Difficulty.

Enlightened Shrines could never spawn in Inferno prior to v1.0.5. There was no need for those shrines in Inferno then, since characters had to be max level to enter Inferno and could gain no further experience. This changed in v1.0.4 with the introduction of the Paragon system, where characters began to gain experience for Paragon levels once they reached 60.

We actually talked about introducing additional Shrine types in the future during a meeting we had earlier today. We’re also currently discussing the possibility of adding the Enlightenment Shrine into Inferno mode since the +XP bonus would be particularly appealing to players working towards their Paragon levels.