Diablo 3's first expansion pack, Reaper of Souls, was officially revealed on August 21, 2013, from the Gamescom show in Cologne, Germany. Key content additions include the Crusader class, a full redesign of the Paragon system, the Loot 2.0 redesigned item system, new types of end game content including Loot Runs (Nephalem Rifts), Adventure Mode, and much more yet to be revealed.

Prior to the full reveal, Blizzard offered numerous hints and teases that something big was coming up at Gamescom and then much more would be revealed two months later at Blizzcon 2013[[1]].

The existence of a Diablo 3 Expansion pack was not a surprise, since the developers have never made a secret of their desire to create at least one.[2] And fans were calling the D3V (vanilla), with the expansions designated as D3X and D3Y, or D3X2, long before Reaper of Souls was revealed. 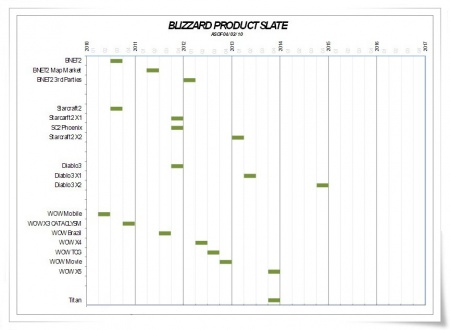 Most fans simply assumed Diablo 3 would have an expansion, as virtually ever successful video game does, especially in the RPG genre. Furthermore, pre-release the Diablo 3 devs answered questions on a possible expansion by pointing out that Diablo 2 only had one expansion, and that this was something of a lost opportunity[3] as long as the game remained popular, thus fueling fan speculation that Diablo 3 would see two (or more) expansions.

This suspicion was all but confirmed by a Blizzard Product Schedule leaked[1] in early 2010, which you see in the image to the right. It listed Diablo 3 as targeted for the second half of 2012, with the first expansion 18 months later, and the second 18 months after that.

Reaper of Souls was released about 22 months after Diablo 3, and when questioned about the time interval, the developers pointed to the extensive patching required on D3v shortly after release, giving the implication that time they would have spent developing Reaper of Souls was spent fixing up the initial game. 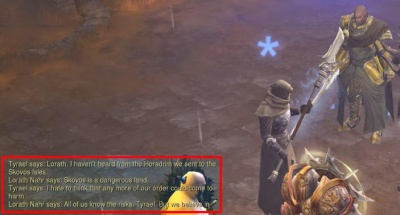 In Reaper of Souls, Tyrael mentions Skovos and Nephalem vanishing.

Almost from the time Reaper of Souls was released in March 2014, fans were speculating on what the second expansion might bring. The consensus soon focused on the Amazon island homeland of Skovos as the most likely setting.

Fans created detailed and well-researched articles arguing that Skovos was the most likely location. [4]

What is going down in the Skovos Isles? Lorath and Tyrael are always going on about it. Is this a hint at upcoming new content?

BrianKindregan: Sanctuary is full of deadly surprises, so the New Horadrim that Tyrael is sending out to help humanity have high rates of fatality. Skovos seems to be a particularly rough place to get assigned.

But many other parts of Sanctuary are equally dangerous, so Skovos is just the topic at hand between Lorath and Tryael.

So how about those Skovos Isles, guys?

Various pieces of Skovos concept art, created by the Diablo III team between 2007-2012.

One qualifying issue is frequent speculation that Blizzard might not create another full Expansion Act, like Reaper of Souls. After all, even fans with the most lore and story interest admit that they almost never play through the Campaign/Story Mode more than once. The Adventure Mode added in Reaper of Souls puts almost all gameplay on a randomized nature, with Rifts and Bounties the main activities.

In light of that, it's often speculated that Blizzard might go more of the DLC route and just make mini-expansions with new items, maps, tile sets for Rifts, a new area or two, and a new class, and sell those for $20 or some other price well below the $40 they charge for full expansions (like RoS).

This seems unlikely for content and financial reasons. Given how much content the developers have been releasing for free with the regular patches in Reaper of Souls -- fans would be unlikely to want to pay for a DLC expansion when they're used to getting almost as much for free in patches. Furthermore, the content added in patches has very little new artwork or story or NPC dialogue, etc. Patches are mostly just changes to the stats of items and other programming tweaks, and can be created by smaller teams. Thus, players speculate, all of the artists and writers and sound designers and others working on the Diablo 3 team must be creating something, and if it's not in the patches it must be larger Act Six type content for an expansion.

Even before Diablo 3's release the developers were fielding questions about potential expansion packs. Back in 2008 Blizzard CEO Mike Morhaime talked about how they want all of their games to have more and more frequent expansions.[6]

Morhaime: In terms of expansions, I think a little bit more frequently is probably good with sort of the goal to get closer to an annual expansion. But I think it really depends on what content you put in the expansion. I don’t think Blizzard will ever be able to do sequels of products like a “Diablo III” or “Diablo IV” on an annual basis, but we might be able to do expansions to those games close to annually. Hmmm, is there more profit? In an ideal scenario, I think we’d probably do [expansions] a little bit more often than we’ve been able to do. But I agree — I think putting too many expansions out too frequently, you probably get to the point where people do need to start taking a little break.

Other comments from Blizzard higher ups have been more "big picture" and mentioned how them only doing one official expansion each for Diablo II and Starcraft was a missed opportunity, and how they don't mean to repeat that mistake with Diablo III or Starcraft II. (SC2 was announced to have two expansions even before release.)

The actual Diablo 3 developers have been very close-lipped on their long term plans, always avoiding the question by giving a standard, "we're just focused on what's right in front of us," type of reply. Here's Jay Wilson playing that game in August 2010.[7]

WoW and SC2 have lots of expansion. D3? One game with expansions, or multiple parts of the game?

Jay Wilson: Right now we’re just focused on getting the game done. We have ideas, but we don’t know. This one’s a handful. All I’ll say is that the previous Blizzard games just did one expansion, like Starcraft and Diablo II, seemed like a missed opportunity. We’ll make more D3 content until we feel like we don’t have anything more to say.

Are there plans to make more regular expansions? Each 18 months?

Jay Wilson: We haven’t really thought about it yet. All of our time/energy to make D3.

The unacceptable (to many fans) state of Diablo 3 upon initial release spurred several major content patches in the months after release. This was not what the developers had planned on, and most fans assume that everyone working on patches necessarily delayed the expansions well beyond the pre-release plans of one coming every 18 months. (An announcement at Blizzcon 2013 would come 18 months after D3's release.)

Jay Wilson spoke on their post-release patching plans in August 2010: [8]

We haven’t really looked into our post-release content plans, but I would not expect us to do big content patch updates. Not like WoW or like an MMO. We’ll add in content in patches, but it will be smaller, like the way Starcraft 2 sometimes does in their patches. It won’t be something that’s on a regular schedule. It’ll be based on need, or based on “we have a really cool new thing we want to put out now and not wait on an expansion.” I’m sure we’ll do some things, but we don’t have any formal plans.

This prediction turned out to be not very accurate, and right from Diablo 3's launch, and continuing into Reaper of Souls and the Seasons, the developers have turned out major content additions every few months.

In early 2013, Reaper of Souls was copyrighted. In addition, an image was posted on an unlinked page at the blizzard website, saying: "And death shall spread its wings over all." A few weeks after, the expansion blog was up and the expansion itself, confirmed.