Queen Asylla's Servants is the informal name for a quest found in the BlizzCon 2010 demo. It was the only proper quest in that year's demo, and will likely return in the final game in a form similar to this one.

The quest was given by the headless ghost of Queen Asylla, who greeted players as soon as they entered The Torture Chambers of the Mad King, a large, green-tinted jail level.

The quest begins as soon as a player enters the third level of the Blizzcon 2010 demo. In the front hallway stood the spectral wraith of Queen Asylla, eager to ask for your assistance. Headless, she held her head in one hand, and the sound came from it.

"Finally, someone to help my people. Guilty of nothing, save being loyal to me, they were cursed to be held in these cells beyond their natural lives. My blessing will allow you to free them from their long torment."

The quest was to find the ghosts of six of her servants. The ghosts were forever circling the bones of the servants, where they lay spread throughout the large dungeon level. The way was not open, of course, and numerous skeletons, wraiths, and other monsters filed the dungeon with peril.

The overall level form was the same every game. It was a square, with complexes of jail cells in all four corners, and two long pathways that crossed in the center. The cells were always in the same place, but the corpses of the servants were randomly-located in each new game, and had to be hunted down anew each time.

After a player found and freed all six ghosts, the quest was completed, and the second stage began. The battle against the massive undead The Warden of the prison. 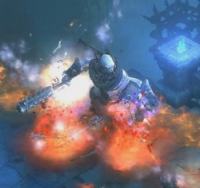 The Warden in combat.

Once the ghosts were free, quest prompts directed the player to find the Warden of the jail. Helpfully, an arrow appeared on the player's mini-map, directing you to run to the center of the level. Once there the Warden's deep voice rang out, threatening the player while dozens of ghouls came scrambling up the sides of the level.

Battle commenced then, in glorious fashion. Upon defeating the Warden, a black key dropped from his body, along with a selection of items. Players had to take the key to the far edge of the dungeon, where a black fence blocked access to a narrow room with numerous chests sitting in it.

Running into the gate with the key in your possession was enough to open it, and players could gorge themselves with loot from the chests before running down a final hallway to the doorway that led to the end of the demo room, or take a turn off to the side into a small room where the ghosts of Archbishop Lazarus, King Leoric, and Queen Asylla reenacted her death for your staring eyes.

In the Final Game?[edit | edit source]

Alone of the three quests in the BlizzCon 2010 demo, this one seems likely to return in the final game, in a form fairly similar to this one. It wasn't a difficult quest, but it at lest advanced the plot, while informing the player of some interesting backstory. The battle against the Warden was fun, and there were numerous valuable item drops, from monsters as well as treasure chests.

A selection of images from the The Torture Chambers of the Mad King dungeon level.