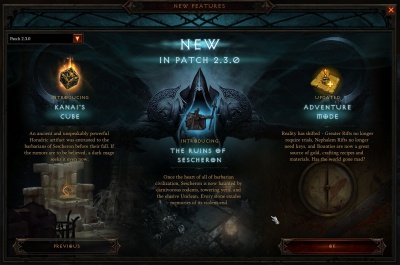 Patch 2.3 was release on August 25, 2015 after some time in testing on the PTR. It was the patch version for all of Season Four, which started August 28th, 3 days after the patch went live.

To see the patch notes posted on the PTR see Patch 2.3/PTR

The frozen wasteland that is the Ruins of Sescheron are now open for exploration! Filled with new enemies, traps, and environmental hazards, you'll be able to explore the region and learn more about what befell the barbarians of Mount Arreat. Explore the Immortal Throne and obtain the ultimate treasure: Kanai's Cube.

Kanai's Cube is a new artisan that offers a slew of new recipes to fully customize your items and catalogue your Legendary powers. Several recipes are available to players immediately upon acquiring

To acquire Kanai's Cube, visit Zoltun Kulle in New Tristram, Hidden Camp, Bastion's Keep Stronghold, or The Survivor's Enclave in Adventure Mode. He'll be quite pleased to guide you on your way.

Each player approaches a new Season a little differently and we wanted to celebrate individual player successes. Beginning in Season 4, you'll be able to track your personal progress through the Season Journey interface. A player's Season Journey is divided into chapters, each with their own descriptive goals and achievements. The further you advance in your Season Journey, the more difficult the milestones become and you'll find there are challenges for every level of player. Completing the highest level Tiers will unlock new portrait frame rewards to celebrate your accomplishments. This feature will be available once Season 4 begins.