Each of the character classes in Diablo III have a set of class skills. There are a lot of skills for each character; more than 50 were shown for the Wizard and Barbarian at Blizzcon in October, 2008. Skills are all listed under 1 tab, sorted into 3 distinct trees and divided into 5 tiers.

While "skills" is the official name, players often refer to "skills" as "spells," "talents," "abilities," and other such terms. These are just synonyms, and are frequently interchangeable in use.

Worth noting is that monsters can also use skills, even though these are not necessarily Character skills.

A fair number of skills are shown in demonstrational videos, and from taking notes of them at Blizzcon in October 2008. More than 50 skills are known for the Barbarian and Wizard, while fewer of the Witch Doctor's skills have yet been revealed. Click to the appropriate pages to learn the names and functions of all known skills.

Each Character class has 3 distinct skill trees. However, these trees are completely merged as of May 2009. Players can freely choose from any skill in unlocked tiers.

Currently we’re envisioning the majority of skills to be capped at 5 points, to begin with. As a form of progression we’re planning for players to be able to increase the point caps of skills. More than likely to a maximum of 15. It’s a system that’s still under heavy design, but the fact of choosing and increasing key skills beyond their initial cap is important to this new unified tier system.

Blizzard has not given any word on how these increased skill caps would be enabled, whether by Character level requirements, quests, in-game achievements, item bonuses, or something else. Like the other features, it's under construction and will change between now and the game's release. 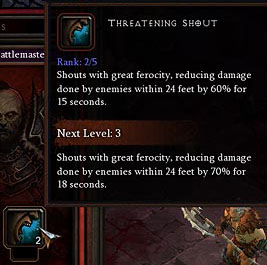 Hovering on a skill produces a visual like the one seen to the right. The name of the skill is displayed, along with the current and maximum points that a character may spend in it. The current function is shown, as is the increases you will enjoy with another point.

One prime difference from Diablo II is the slot for a skill rune that you see below the skill, in the skill tree. Only active skills (as far as is known) have slots for skill runes, and skill runes can be freely socketed and swapped in and out. (Subject to change during further development.) See the skill runes page for more details.

Diablo III skills are either "active" or "passive." There are many more passive skills than active skills. At Blizzcon in October 2008 (a very preliminary build of the game), each skill tree was set up in tiers, with 4 or 5 skills per tier. On each tier, one or two were active and the rest were passive.

Passive skills grant the character some sort of bonus that is always in effect. Passive skills do not need to be cast to activate them; they give a bonus all the time, as soon as points are placed into them. These are skills and spells like Efficient Magics or Power of the Battlemaster. (No passive Witch Doctor skills have yet been named.) Passive skills boost the damage of other spells, lower the mana cost of casting them, increase their duration, etc. Passive skills were often called "masteries" in Diablo II, and that term is still applicable to many of them in Diablo III.

Skills lie at the core of the characters and propel all combat in Diablo III. For the D3 Team, the skills literally define the character. The team sets out to create what they call "signature skills" -- click that link to read much more about this topic from a panel discussion from the WWI in Paris, when Diablo III was announced. Signature skills are active skills that are very distinctive and evocative of the character. For instance, the design goal of the Diablo III Barbarian is to make a huge, powerful, thundering brute of a melee fighter. So his signature skills are things that crush hordes of enemies in front of him, shake the entire screen, rip holes in the earth, etc. Wizards are deadly, reckless mages, so their signature skills are spells that wreak massive havoc upon monsters with fire, cold, and other elements.

1UP: In creating this game, would you say that the character classes and their powers drive the rest of the game, or are their powers created as a result -- or solution -- to problems presented by the game?

JW: Probably the best way to describe it is that initially, when we're doing skills for a class, we're not thinking anything except "what makes this class awesome? Why do I care about this guy?" Then you say, "Because he can hit the ground and create a small localized earthquake that destroys everything in front of him." That sounds pretty awesome; that sounds like a guy that I'd want to play. So early on, that's really our fixation: What is going to make this class sing? But that only really drives the first half-dozen skills. After that, we start getting into what mechanics have we put in the game that we want this class to take advantage of. For example, with the Wizard, we gave her a passive skill that causes enemies to drop mana orbs -- just like health orbs. So that's a mana-recovery mechanic for her; it plays into her resource and plays into the health-orb system.

So there, we just said, "We need a recovery mechanism for her -- what would work? Well, we can give her something similar that we already give for health." But then that doesn't mean anything for the Barbarian since he uses a completely different resource. For him, we tend to focus on skills that make him play in a way that's interesting. His "fury resource" is designed to drive the player forward, like a Barbarian, because he's very tough and is a close-quarters combatant. He wants to move forward, because the mechanic is "I have a lot of fury, which helps me deliver a lot of damage, but I'm going to lose it just sitting around." It makes him very aggressive, which is what we wanted out of the character. So that was driven by [the concept of] how do we want this guy to play. Very aggressively, and hence we built this mechanic.

And lastly, [there's] the monster design. As we get further and further into the game, our goal is to make monsters that we can't figure out how the player can defeat [with the existing skills] and give the player the tools they need to defeat them. So the design of the monsters has a direct relationship to the design of the classes. That's kind of an ongoing thing; we [decide] "Let's create a monster that has really debilitating rooting attacks that just get you stuck when you encounter them." Then we see that this really screws with the Barbarian, so we give him a skill that lets him break out of roots so that he can counter that. Those things are interesting and allow for the player to have a broader, deeper character. On the other hand, we don't want to go too far -- a lot of mechanics of World of WarCraft are based heavily on control, and we want to make sure that Diablo 3 stays mostly a combat game based mostly on attacks.

Prior to the huge skill array change announced in May 2009:

Skills in Diablo III are organized into skill trees. The form and function of these trees has evolved (and continues to do so) during development. Each character has three skill trees, and the game design (currently) favors specializing in one tree; a certain number of points are required to be spent in a tree before higher tiers become available, and the D3 Team is also experimenting with higher caps on certain skills, though what a character would do to enable this is unknown. It could be Clvl based, item based, points spent in a tree-based, or something else entirely.

Structurally the trees are similar to the skill trees found in World of Warcraft. They are displayed in tall rectangular boxes with lower level skills on top. The skills are arrayed on "tiers," each of which requires some amount of skill points spent in that tree to access. How many points and how many skills are on which tier is subject to ongoing change.