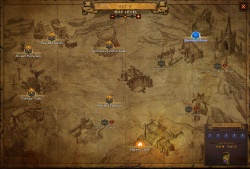 Shrouded Moors Location
Fetid swamps stretch beyond your vision, obscured by a dense fog that commands malevolent intent. Ancient structures long since abandoned are scattered across the sunken mire, and the absence of human activity might have something to do with an ongoing eerie sense of being watched. Still, despite the sense that something unnatural looms in the distance, the notion that treasure and glory may await tempts even the most cautious being.

This land shows clear signs of the influence of those untamed wilds, as beasts most foul and vicious have become its primary inhabitants. The remaining stone structures—their purpose lost to the passage of time—stand as the only clue to any humanoid settlers that may have once called this forsaken soil home.

The Shrouded Moors is located in Kehjistan can be accessed from Act II through Adventure Mode. This zone also includes the Temple of the First Born located beneath the Shrouded Moors.