Temple of the First Born 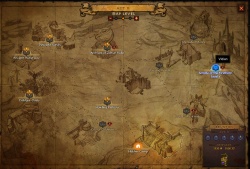 Shrouded Moors Location
This ancient Temple of the First Born is located beneath the Shrouded Moors in Act II which were added in patch 2.6.0. The temple can be accessed in Adventure Mode.

Described by Blizzard as one of the oldest locations in Sanctuary, it's where Inarius and Lilith went and one of the first places humanity set foot in Sanctuary.

An ancient monument to the earliest nephalem, the Temple of the Firstborn has long been hidden away deep beneath the surface of Sanctuary. However, a new and dangerous cult has arisen and taken residence within the buried structure. Disappearings on the outskirts of the moors are inciting fear, and the dusty tiles of the temple are streaked with disturbingly fresh blood. There is no doubt that a powerful evil now lurks below.

These cultists have been hard at work, twisting the flesh of mortals and bending creatures to their ill will. Abominations stalk the halls—horrors that should not be, filled with hate and driven by bloodthirst. Who, or what, bids the creation of such terrible creatures? [1]

The design was also inspired by H.P Lovecraft according to Blizzard. [2]