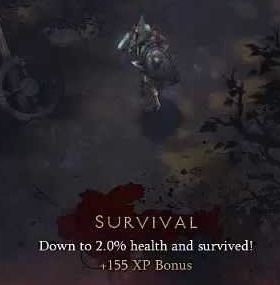 A Survival Bonus in Diablo 3 refers to surviving when very near death. Players who drop below 5% of their total hit points without dying will earn this bonus, which is announced via on on-screen pop up. The actual experience bonus is of negligible value, but players appreciate being saluted for their narrow escape.

In more general terms, a "survival bonus" is a game feature that could be seen as the other side of the coin to a "death penalty." Most games attempt to create a working balance by punishing characters for dying, via lost experience, gold, damaged items, etc. Though the issue was much-debated pregame, Diablo 3 largely did away with death penalties, other than in Hardcore mode.

Rather than death penalties, players often suggested[1] life or survival bonuses; rewards for staying alive. The point was to incentivize smarter play, so that players who loaded up in glass cannon style to race through the content -- killing very quickly but dying anytime things went wrong -- would not have all the advantages.

The Pool of Reflection, added in D3v2 and RoS, is Diablo 3's first effort at a survival bonus. It grants 25% bonus experience gain, and the effect is lost when a character dies. Pools have given softcore players some incentive to stay alive, but they are much less impactful in Hardcore, where most players (above Paragon 80ish) just have a full-time Pool bonus.

Most players want more of a bonus from Pools, and many would like[2] additional Survival Bonuses and/or Death Penalties as well.