Rumors about a Diablo III secret level began even before the game itself was announced, with fans frequently speculating about what sort of Secret Cow Level we might see next time. It's unknown if the D3 Team had anything in mind in the early days, but shortly after Diablo III's debut, the art controversy kicked up, resulted in various there are no rainbows in D3! jokes, and was picked up and run with by the design team themselves.

Fans digging into the game files included in the Diablo III beta client found numerous references to secret levels and hidden content. AS with all data mined information, it's not known if the following will be in the game in any form.

There are also numerous horse-related codewords in the Diablo III game info.[1] Several NPCs (including Tyrael) most of the big bosses (including all of the act bosses), and various related items and areas bear horse-releated codenames, to preserve their secrecy. For instance, "Dressage" is the codename for the Thousand Pounder boss. Thus there are dozens of equine-themed code names in the game code, only some of which actually refer to the secret level.

The following are the code names for various events in the game, as they appear in the game files. More information will be added as these terms are decoded. The 1000 Monster Fight events is thought to refer to Tyrael and angel-related events. 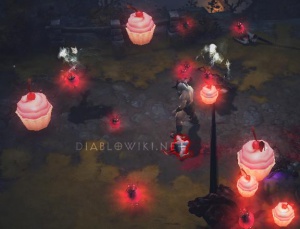 It's possible that these units are a reference to the My Little Pony Friendship is magic characters Twilight Sparkle and Rarity. In this series the unicorns Twilight and Rarity represent the elements of magic and generosity, respectively.

Rainbow Western may also be a reference to Rainbow Dash and Applejack (she's the pony equivalent of a cowboy). The little ponies also have a fondness for cupcakes, and in the beta emulator, an alternate model for health globes was discovered.

Cows made a slight appearance in datamined versions of the Diablo III beta. There were two items related to Blizzard's favorite friends--the bovines. The first being the staff of cow, seen to the right. 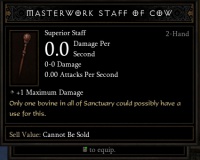 Another is a tome the blacksmith needs in order to craft said staff. There is no other evidence of a cow level besides teasing or hinting from development staff that may not lead to anything at all, and surely not substantial enough to warrant noting in a wiki. However, the images and references are amusing.

Most fans thought Diablo III looked awesome right from the start. A minority of fans weren't so pleased though, and their objections soon crystallized around the idea that Diablo III was "too colorful." No one seemed to object to the monster and character graphics; it was the well-lit, blue/green-tinted dungeons that drew most of the criticism, and some of the too-pretty outdoor scenes. Some of which even had rainbows!

See the art controversy page for a full rundown of this issue. 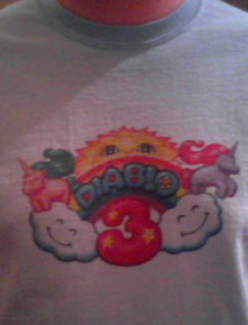 The "too colorful" argument went on for some time, but had largely faded away by Blizzcon 2008, in October, four months after the game's debut. The D3 Team saw that the controversy wasn't entirely forgotten, by wearing custom made baby-blue Diablo III t-shirts featuring happy unicorns, clouds, rainbows, and more. One is seen in the the photo to the right. 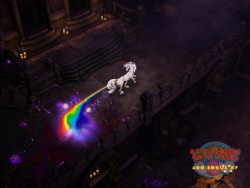 The next instance of official support for rainbows and unicorns in Diablo III came in early 2009, when Bashiok got to joking with some fans in a forum thread, and quickly produced this photoshopped screenshot. It's a real image from Diablo III; a scene that's seen in the WWI gameplay movie; Bashiok just added the rainbow-farting unicorn and associated special effects.

There is an actual Secret Level in Diablo 3. Namely the Happy Unicorn Land as dubbed by the My Little Pony community or Whimsyshire, where all your dreams come true. It is filled with Carebears, Unicorns, and flowers all trying to kill you, albet in a terribly amusing way. To get to this place you need to construct the staff of herding, which is crafted by the blacksmith. The first thing you need is the recipe for the staff, which is easiest attained by killing Izual the betrayer in Act IV. There are numerous ingredients you need in order to craft the staff and a 50000 crafting fee. The ingredients are found as follows:

Black Mushroom: This is most easily obtained in the Cathedral in Act I. You can find clusters of mushrooms throughout the cathedral.

Wirts Bell: This is easily obtained by purchasing it from a merchant in the city in Act II. It costs 100000 gold

Rainbow Dye: Obtained from the "Mysterious Cave" in act II. The cave is found by saving a merchant from the most far point to the south. He is surrounded by ghosts, and needs to be saved before the cave opens. If the merchant is not there, you can reload the quest until it appears.

Chattering Gem: You can get this from a rare mob in act 3. It is found by exploring the plains where you destroy the siege engines. In this area there is a chance for multiple caves to spawn. In one of these there is the rare mob which spawns the gem.

Leorics Shinbone: This is the most easily found of all the items. In Leorics manor. Turn right in the first room you can after entering, there is a fireplace there. If you have the spawn you will be able to rummage through a pile of wood. If the fireplace is empty. Repeat the process mentioned in the rainbow dye part.

None of this joking means there will be any sort of secret level in Diablo III, and it certainly doesn't mean that there will be a secret level with rainbows and happy unicorns, etc. At this point the fans and designers are just having fun with this ridiculous concept, and amusing themselves by throwing the images and jokes back and forth. Whether they'll amount to anything that's actually in the game remains to be seen.

After crafting the staff you will need to go back to Act I. Here you can either teleport to Old Tristram or simply walk there. If you choose to teleport, begin taking to road back to New Tristram. On the street you will see a dead cow lying there. As you approach is a Cow King spirit will appear. He will express his satisfaction that you bought the item and proceed to tell you that there is in fact, no cow level. Do not dispair here however. You will be offered the chance to go into a magical land of rainbows and dreams. Here you will enter the secret Happy Unicorn Land. The "quest" can be repeated unlimited times after crafting the staff in contrary to the secret cow level in Diablo 2. 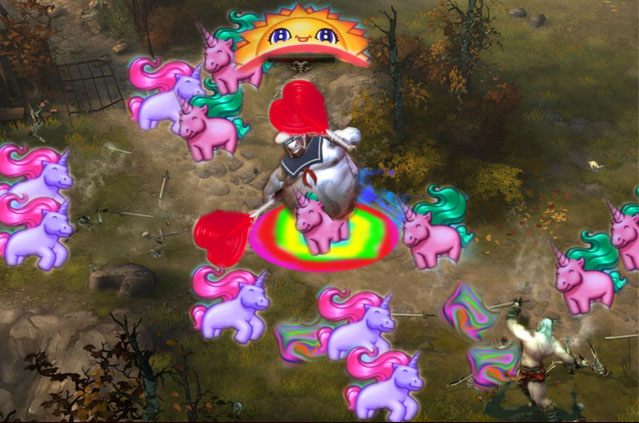