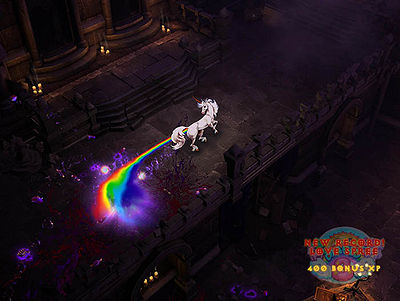 The most likely early contender for a secret level style of Easter Egg in Diablo 3 developed shortly after the game was announced. The early fan complaints about rainbows and bright colors that turned into the Art Controversy led to numerous jokes about rainbows, unicorns, happy clouds, and such. The D3 Team parodied this idea with their hugely-popular Blizzcon 2008 t-shirts, and some months later, when Diablo 3 Community Manager Bashiok posted a photoshopped Diablo 3 screenshot featuring a unicorn apparently farting a rainbow that created a deadly "love combo" of slaughtered monsters, the "Secret Rainbow Level" rumors were off and running.

This is entirely speculative, but it's not out of the realm of possibilities. The Diablo II Secret Cow Level got its start in similar fashion; it was just an April Fool's joke for a screenshot, made in response to the persistent Diablo I secret cow level rumors, and there was so much fan reaction and enjoyment that the team went ahead and put it into the game. The D3 Team is under no compunction to include a joke secret level, but Blizzard designers have always shown a good sense of humor, and as famous and enjoyed as the D2 secret level was, they've go to be feeling some pressure to live up to that standard with Diablo III.

Only time, and possibly April Fool's screenshots, will tell.