Real I.D. is a system Blizzard has been working to install through Battle.net, over all of their new games. It provides players with one centralized account through which they can connect to all of Blizzard's games. Real ID is feature-rich and is something that Blizzard clearly spent a lot of time and effort creating. Despite those facts, it's been greeted with a lot of player discord and dislike, since many Blizzard gamers wish to retain some amount of anonymity during their online play and forum activity.

Blizzard's attempt, in July 2010, to compel mandatory real name posting on their forums resulted in an enormous outburst of fan protest, forcing Blizzard to drop their plans for the feature just two days after announcing it.[1]

The first real news about Real ID came in May 2010, when Blizzard announced a Facebook / Battle.net integration.[2] Even at that point most community feedback was strongly negative, as fans saw far more drawbacks than benefits to having their real name attached to their gaming habits.

IRVINE, Calif., May 05, 2010 -- Blizzard Entertainment, Inc. announced today that its Battle.net gaming service will integrate with Facebook, linking the world's premier online gaming platform with the world's most popular social platform. The first step in the integration will enable StarCraft II: Wings of Liberty players to quickly add Blizzard gamers who are friends on Facebook to their Battle.net friend lists, facilitating their social gaming experience on the service.

See the Facebook article in this wiki for much more detail about how Facebook intergration will be handled in Diablo III.

A new messaging system tied to Real ID came to WoW on June 22, 2010. It was more feature-rich than the existing WoW friend system, allowing players to speak with others players on different realms, and will allow that with friends playing Starcraft II and other future Battle.net games.

Unfortunately, in the view of many players, it does this with your real name account, something most WoW players have set up since they have a credit card for billing on their WoW account. Early editorials on this new Facebook integration were fairly full of displeasure,[3] and Diablo fans continued to view these developments with trepidation.

While the real name aspect of things in World of Warcraft had stirred up some controversy, the public outcry really began on July 7, 2010, when Blizzard announced plans to require Real ID for anyone who wished to post on the Battle.net forums for WoW, SC2, tech support, and other games going forward.[4]


Recently, we introduced our new Real ID feature, a new way to stay connected with your friends on the new Battle.net. Today, we wanted to give you a heads up about our plans for Real ID on our official forums, discuss the design philosophy behind the changes we’re making, and give you a first look at some of the new features we’re adding to the forums to help improve the quality of conversations and make the forums an even more enjoyable place for players to visit.

The first and most significant change is that in the near future, anyone posting or replying to a post on official Blizzard forums will be doing so using their Real ID—that is, their real-life first and last name—with the option to also display the name of their primary in-game character alongside it. These changes will go into effect on all StarCraft II forums with the launch of the new community site prior to the July 27 release of the game, with the World of Warcraft site and forums following suit near the launch of Cataclysm. The classic Battle.net forums, including those for Diablo II and Warcraft III, will be moving to a new legacy forum section with the release of the StarCraft II community site and at that time will also transition to using Real ID for posting.

Though cheerfully-worded, the full announcement was perhaps the single least popular thing ever said by Blizzard Entertainment. It precipitated a deluge of nearly unanimous criticism. The biggest single outpouring was in the official announcement thread on the US WoW forums[5], where more than 10,000 fans posted in less than a day, the vast majority of them strongly against the proposed forum change. (The thread ultimately grew to more than 2500 pages, at ten posts a page.)

Leading Diablo community site Diii.net made two posts collecting editorials from around the Internet, almost all of which were strongly opposed to Real ID, as were the commenters on the site.

Blizzard was unwilling to give in without a fight, and had all of their community managers out on the front lines of their forums, falling on their swords left and right. One of the best explanations given was by Wryxian, one of their WoW CMs from Europe.[6]

We have been planning this change for a very long time. During this time, we have thought ahead about the scope and impact of this change and predicted that many people would no longer wish to post in the forums after this change goes live. We are fine with that, because we want to change these forums dramatically in a positive and more constructive direction.


It’s been very obvious over the last few years that the forums are an exceptionally valuable source of information both for players and for us to gather feedback. There are many threads on this forum now, and over the last few years, that people have been constructively discussing many aspects of the game. They’ve received new wisdom and have then been able to go back to the game and enjoy it further with the new knowledge acquired through the forums.

These threads, however, can often be lost amongst a great deal of other threads that are basically filled with trolling, name calling, flaming, off-topic conversations and that’s just a small amount of some of the content that has been found in these forums over the years. We don’t want that anymore, and we believe the Real ID change will bring about a lot of the improvement that we are hoping for.

There’s a lot of scare-mongering going on about the change, but there seems a need to make something very clear. The forums have always been an optional extra—something you can choose to participate in if you wish to. With our Real ID changes for the forums, this is still the case. The only difference will be, if you do choose to participate in the forums, then you will do so by using your real name. But only after you’ve been warned and accepted this in advance.

All this was just in the day after the Real ID forum announcement. When all of Blizzard's arguments failed to make a dent, and the Electronic Freedom Federation joined in[8] the condemnation, things looked grim for Real ID. When the most influential gaming site, Penny Arcade joined in, fans hoped that the end was nigh. 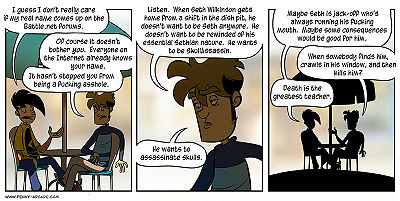 Below is a quote from the Penny Arcade news post, with their comic on the subject to the right:[9]

The RealID thing is a bad idea that won’t work. If it were merely a bad idea, or merely wouldn’t work, maybe there’d be something in it. Accountability is crucial -- you might recall our theory on the subject -- and a fixed persona makes the laws of a microculture enforceable. But the idea that this persona must bear your actual name to lend it value (for you, or for others) is ludicrous.

The worst part about the official messaging is how it conflates expanded Battle.Net functionality with RealID, so that it seems as though these things are inseparable, as though your mystically-infused “truename” is a bundle of syllables congealed with a cosmic power. They chose to commingle these things in order to realize Battle.Net as a Social Network, and to develop true cultural currency (also: regular currency) thereby.

On the morning of July 9, 2010, two days after issuing the original announcement, Blizzard announced that they were bowing to the wishes of their public, and removing the mandatory requirement[10] of using Real Names on their forums in the future, while keeping their plans to incorporate all of the other planned social upgrades. A partial quote from Mike Morhaime's announcement:[11]

It's important to note that we still remain committed to improving our forums. Our efforts are driven 100% by the desire to find ways to make our community areas more welcoming for players and encourage more constructive conversations about our games. We will still move forward with new forum features such as the ability to rate posts up or down, post highlighting based on rating, improved search functionality, and more. However, when we launch the new StarCraft II forums that include these new features, you will be posting by your StarCraft II Battle.net character name + character code, not your real name. The upgraded World of Warcraft forums with these new features will launch close to the release of Cataclysm, and also will not require your real name.

I want to make sure it's clear that our plans for the forums are completely separate from our plans for the optional in-game Real ID system now live with World of Warcraft and launching soon with StarCraft II. We believe that the powerful communications functionality enabled by Real ID, such as cross-game and cross-realm chat, make Battle.net a great place for players to stay connected to real-life friends and family while playing Blizzard games. And of course, you'll still be able to keep your relationships at the anonymous, character level if you so choose when you communicate with other players in game. Over time, we will continue to evolve Real ID on Battle.net to add new and exciting functionality within our games for players who decide to use the feature.

The furor died down quickly, once the real names requirement was removed; a testament to the popularity of Blizzard's games, since this level of brouhaha could have broken the back of many a lesser company. A week later, Blizzard quietly posted an updated, amended FAQ about Real ID, with a few key changes made to the "real names required" portion.[12]

New installments in this issue will certainly arise, since Activision/Blizzard still undoubtedly wish to enable better communication and fan interactions and features over Battle.net -- or leverage their huge paying user base into an ad revenue juggernaut of the sort that Facebook has created. One or the other, depending on your perspective on their Real ID efforts.

A year later Blizzard introduced the BattleTag, which had nearly the same functionality as the proposed Real ID system, but allowed players to pick their own "Tag." It was accepted and even embraced by the playing community with a minimum of fuss.