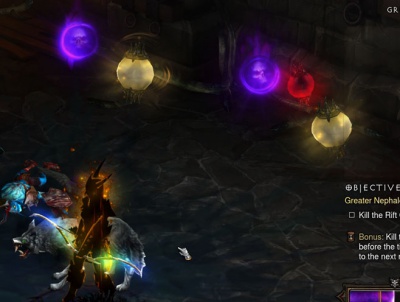 Nephalem Globes (AKA Nephalem Orbs or Power Globes) are yellow glowing orbs that occasionally drop from slain monsters. They look much like Health Orbs (or the purple Progress Orbs found in Greater Rifts), but instead of granting healing (or Greater Rift progress), Nephalem Orbs grant a stack of Nephalem Glory, a bonus that increases Movement Speed and creates arcing bolts of lightning damage.

Nephalem Glory and the Nephalem Globes came first to the Diablo 3 console, and were later added to Diablo 3 when Reaper of Souls launched in March 2014.

The Nephalem Glory can increase up to three stacks, if a player scores three of the orbs in time. Each orb adds a stack and refreshes the buff timer to 60 seconds. (Health Orbs add 5 seconds to the timer, and five health orbs will up the stack one level.) Once a character reaches three stacks, additional Orbs will merely reset the timer to the full duration. If the buff timer runs out, the entire bonus will vanish, instead of simply decreasing by one stack.

The bonus damage isn't very obvious, so the movement speed is what most players notice once they earn the second stack.

The overall effect of this buff is not real impactful on gameplay, but it's fun to move faster and see the flashes and streaks of yellow light.